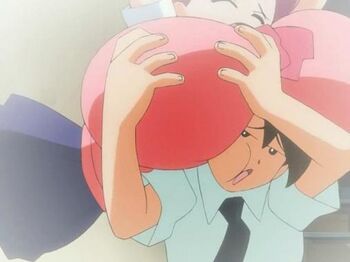 There's a reason it's pronounced achin'.

The (often satirical) use of female breasts for comedy, rather than (or in addition to) Fan Service. Although motherly characters are oft given large chests, it is more common for the chest to be a cartoonish exaggeration (even within the context of the series) on a funny character for the purposes of physical humor. This even applies to a character who is otherwise very boyish-looking.

Will usually be co-opted back into Fan Service at some point, unless the show is a Shojo series.

Contrary to what widespread Trope Decay would have us believe, this trope is not synonymous with "any pair of breasts larger than a B cup", but refers specifically to large breasts regularly and intentionally used to comedic effect.

See also Buxom Is Better, Gainaxing/Jiggle Physics, Most Common Superpower. Marshmallow Hell, Funbag Airbag and Thanks for the Mammary are related physical gags.

Compare with A-Cup Angst, Petite Pride, and on a different axis, Gag Penis.

Examples of Gag Boobs include:

Retrieved from "https://allthetropes.org/w/index.php?title=Gag_Boobs&oldid=1924295"
Categories:
Cookies help us deliver our services. By using our services, you agree to our use of cookies.