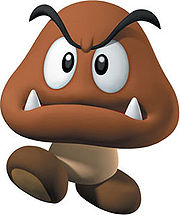 Don't you just want to pat the cute little guy on the head (with your feet)?

A type of Video Game Character. This is that one enemy that will always be encountered in the first level (and usually, but not always, as the very first enemy in the game), has a simple movement pattern, and is reassuringly easy to beat. They are the meekest and mildest of Mooks, and are the very first entries in the Sorting Algorithm of Evil. Stomping or blasting one of these guys for the first time marks the moment where the person holding the controller really starts playing the game. Basically they're here to help you learn how to attack, and to spoon-feed you your first few EXP.

In old-school RPGs, this will usually have a Slime or Slime-like monster, although Goblins are not unheard of. See also Rat Stomp. Is usually victim to becoming an Underground Monkey. Oftentimes their lowly cannon-fodder status is subverted by making Underground Monkey versions be the rarest (and sometimes toughest) enemies in the game - see Metal Slime. Sometimes they are dangerous because of the sheer number of them. If being attacked by one takes one hitpoint, then being met by 100 poses a problem. If any monsters are recruitable, expect this to be the Joke Character, maybe the Lethal Joke Character.

Watch out, because they might turn out to be Not So Harmless towards the end of the game. (see also Magikarp Power)

Note: the term "goombah" is still a live piece of offensive slang in the Northeast of the U.S.; use with caution around Italians stronger or meaner than you are (unless they are gamers, but especially if they're plumbers), or if you just plain don't want to be a jerk.

Examples of The Goomba include:

Retrieved from "https://allthetropes.org/w/index.php?title=The_Goomba&oldid=1920955"
Categories:
Cookies help us deliver our services. By using our services, you agree to our use of cookies.