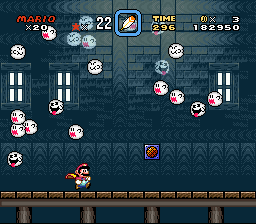 Who ya gonna call?

The place where the dead come back to annoy you. This is the area in the game with unconventional, undead enemies that can only be defeated through certain means. With ghosts, they might not be beatable at all. With zombies and vampires, it might require exposure to reflective sunlight or casting healing spells in RPGs. May be a depiction of Überwald, or a Haunted House. It'll always be nighttime in this level.

This area will frequently cross with another location, like a cemetery, temple or forest—there's no quicker way to make an area creepier than to make it haunted. Often it also has inconsistent lighting.

Let's face it- a good scare is always nice. Not always, but try not to take it too far...

Named after the stage from Super Mario 64.

Examples of Big Boo's Haunt include:

Yes. Resident Evil, House of Dead, and any other horror game you can think of. Extra points for reaching the bottom of the page without adding them to the list.

Retrieved from "https://allthetropes.org/w/index.php?title=Big_Boo%27s_Haunt&oldid=1504351"
Categories:
Cookies help us deliver our services. By using our services, you agree to our use of cookies.