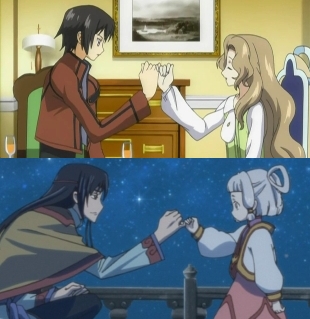 Don't get any funny ideas.

One very common way to establish that a male character is a Nice Guy (even if the niceness is hidden under a gruff exterior) is to give him an instinctive desire to be a big brother to smaller, younger, weaker or female characters. These other characters may be truly younger siblings, or they may be completely unrelated, or even older, and the tendency for males to act as their protector is the Big Brother Instinct. Female examples exist, though in a smaller proportion.

The Big Brother Instinct serves to explain why fan attraction to Moe tropes and devices can be an emotional, rather than sexual, response. There seems to be something inherently comforting to an awkward male about being looked up to by a younger girl for support. Therefore Moe can be wish fulfillment about taking a "big brother role" instead of about being a Love Interest (although that version is common too).

If both characters are male, the older (or in the case of twins, the physically stronger) brother will usually act as the younger/smaller brother's protector, to the point of treating him like a child, even when the younger brother is fully capable of protecting himself. This behavior can come across as loving and nurturing or as condescending and smothering. If the older brother goes to extreme, morally questionable lengths for the sake of the younger sibling, then they are a Knight Templar Big Brother. And while Good Feels Good, it could feel too good.

Has nothing to do with the TV show Big Brother. The Nineteen Eighty-Four meaning of "Big Brother" is covered under Big Brother Is Watching.

Examples of Big Brother Instinct include:

Retrieved from "https://allthetropes.org/w/index.php?title=Big_Brother_Instinct&oldid=1957273"
Categories:
Cookies help us deliver our services. By using our services, you agree to our use of cookies.