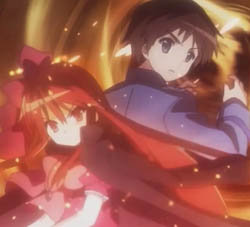 She's a flaming Tsundere with a katana. He's a ghostly tactical power supply. They Fight Crime and Demonic Invaders.

You know, the kind of couple where bullets figure prominently in the story of their early romance. Where "war buddy" and "significant other" are synonyms. Where if you harm either one, the other will kill you as surely as the sun rises. Likely to have a Back-to-Back Badasses moment.

Battle couples aren't that common, due to restrictions on women in combat. One might expect for the great prevalence of men to mean that gay couples would be overrepresented here, but one would be disappointed in that case; anti-Badass stereotypes of gay men have probably been holding that in check. In heterosexual pairings, the woman will often not be a conventional soldier, but a partisan of some kind. They tend to be more resistant to breakup than most, given the extra bonds forged in combat, but they are particularly vulnerable to losing one half in battle. If the female half of this couple needs to go in disguise, she is a Sweet Polly Oliver. If they have gone all the way expect them to engage in a lot of "Glad to Be Alive" Sex. It's also possible they may get it on before the fighting

In Real Life, it's also the same as above—and often, they're officers, instead. There are laws in some areas against this sort of thing if one outranks the other, although this is usually meant to prevent the superior from forcing the under-ranked into it.

If they're married, they're likely Happily Married. Has a platonic counterpart in Adventure Duo. It may overlap with Spy Couple. In fantasy settings, they'll probably manifest as Sword and Sorcerer. Add a kid or two for a Badass Family with a Mama Bear and a Papa Wolf. If it's one guy/girl and his/her harem instead of just two people, then it's a Harem Hero(ine) and his/her Battle Harem.

See Bash Brothers, Sibling Team, and Fire-Forged Friends for the non-romantic, sibling and platonic forms, respectively. If they're criminals, they're an Outlaw Couple. If they are royalty who do this as one of their jobs they are also a Ruling Couple. If they're villains, they live in Unholy Matrimony. Absolutely no relation whatsoever to this classic board game.

Examples of Battle Couple include:

Retrieved from "https://allthetropes.org/w/index.php?title=Battle_Couple&oldid=1928278"
Categories:
Cookies help us deliver our services. By using our services, you agree to our use of cookies.