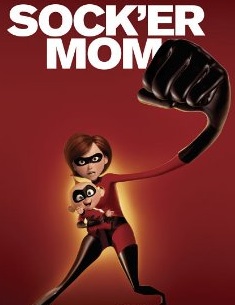 We all wish she was our mom.

When an Action Girl is confronted with motherhood, she usually has two choices. She could accept the baby and her "fate" to Stay in the Kitchen; or she can keep her Action Girl status by losing her baby through the wonders of a Magical Abortion, a Convenient Miscarriage or simply giving it up for adoption if it gets born.

The Action Mom says bollocks to that and chooses to Take a Third Option as she keeps her role as saviour of the day and the world while raising her children. She's a real Badass mother.

Beware if you ever harm her children, for you will have an Action Girl invoking the Mama Bear at your heels. There is also a chance that said children will grow up be badasses just like her.

Truth in Television in the case of mothers working in hazardous jobs such as police work. It can also apply to Dark Action Girls, in the form of Deliver Us From Evil or Dark Action Mom.

Often shows considerable overlap with Hot Mom. She may also be the matriarch of a Badass Family. If a she enters this state before the child has even been born, she is a Pregnant Badass.

Examples of Action Mom include:

Retrieved from "https://allthetropes.org/w/index.php?title=Action_Mom&oldid=1848834"
Categories:
Cookies help us deliver our services. By using our services, you agree to our use of cookies.