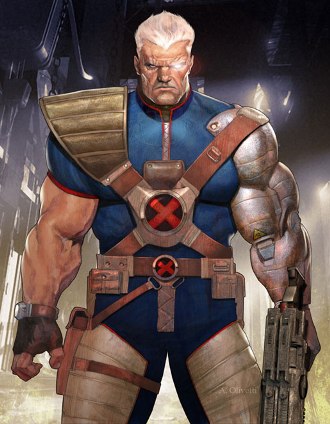 Cable is a fictional character that appears in comic books published by Marvel Comics. The character first appeared in "The New Mutants" #87 (March 1990), and was created by writer Louise Simonson and artist/co-writer Rob Liefeld.

Cable, or Nathan Christopher Charles Dayspring Askani'son Summers, is a time-traveling soldier from the future who is here to prevent his apocalyptic timeline from coming to pass. He is biologically the son of X-Men Jean Grey (through her clone Madelyne Pryor) and Scott Summers a.k.a Cyclops. As an infant, he first appeared in "Uncanny X-Men" #201 (January, 1986). Though it took years for said infant and the time-traveling adult to be revealed as the same individual.

Thanks to the machinations of Mr Sinister, he was born with a destiny -- to kill Apocalypse. Not being an idiot, Apocalypse took steps to prevent this at an early stage, by infecting Nathan with a special "techno-organic virus" which severely limited his powers and would have killed him if his loving father and, uh, step-mother hadn't sent him 2,000 years into the future to be raised by his alternate-universe sort-of-half-sister's all-female psychic death cult (it's okay -- Scott and Jean spent their honeymoon living in cloned bodies in the future in order to raise little baby Nathan up to be a man).

Once he had grown into a grizzled old veteran, Nathan came back in time to the present in order to kill Apocalypse before he could conquer the world.

Now that Cable has accomplished his mission (repeatedly), he became a man without a purpose; the character has been bounced around through a variety of new concepts. He's been a member of the X-Men more than once, became a messiah figure and developed an Odd Friendship with a certain psychotic katana-wielding mercenary, and then adopting and raising of Hope, the first mutant born after the mass depowering (and who may be the reincarnation of Jean Grey), while traveling through time. After returning to the present with a teenaged Hope, Cable appeared to have made a Heroic Sacrifice at the end of the Second Coming X-Men event but has since returned. His powers have fluctuated as well, regaining and losing both his techno-organic symbiote and his mutant powers.

Also has the notorious reputation as a Game Breaker in Marvel vs. Capcom 2.

Tropes used in Cable include:
]
Retrieved from "https://allthetropes.org/w/index.php?title=Cable&oldid=1846396"
Categories:
Cookies help us deliver our services. By using our services, you agree to our use of cookies.