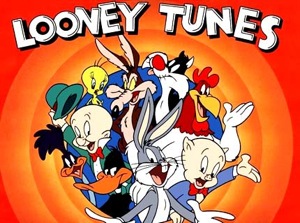 Looney Tunes and Merrie Melodies were two series of theatrical cartoon shorts running from 1930 to 1969. Initially produced by Leon Schlesinger for distribution by Warner Bros, in 1944 the studio took the unit over entirely when Schlesinger retired.

Originally, as the names indicate, these cartoons were meant to rip off the sweet, sentimental musical shorts then in vogue: for instance, Disney's Silly Symphonies. That basing cartoons around popular public-domain songs—or, even better, ones the studio already owned—was a fast and relatively cheap way of producing them didn't hurt any, either.

The first set, Looney Tunes, was introduced with 1930's "Sinkin' in the Bathtub" featuring minstrel-like mascot Bosko the Talk Ink Kid, and for its first decade relied more heavily on recurring characters and thus lower budgets. Merrie Melodies, introduced in 1931's "Lady, Play Your Mandolin" featuring the (suspiciously Mickey Mouse-esque) character "Foxy", were initially intended as the music videos of their day, basically animated commercials for the Warners-owned sheet-music library.

When Looney Tunes switched to color in 1942, and the Merrie Melodies line ditched the music around the same time in favor of its own rising star—one Bugs Bunny—differences between the two were limited to their distinctive theme songs, until 1964 (when both series wound up using the same theme music as a result of using a modernized, and slightly bizarre, opening/closing sequence).

Over the course of their tenures at 'Termite Terrace', as the WB animation studio was informally known, the legendary directors Chuck Jones, Tex Avery, Bob Clampett, Friz Freleng, Frank Tashlin, and Robert McKimson—assisted by talented animators such as Art Davis, Ken Harris, Emery Hawkins, Bill Melendez, Virgil Ross, and Rod Scribner; brilliant writers like Warren Foster, Mike Maltese, and Tedd Pierce; ace musical arranger Carl Stalling; and sound effects whiz Treg Brown—created and refined a large and diverse cast of characters, the most famous of which include (listed in chronological order of introduction):

...along with dozens of lesser known and one-shot characters. Quite nearly all of these were voiced by Mel Blanc, the Man of a Thousand Voices; in fact, that was used as a gag in at least one short. Other WB voice artists included Stan Freberg, June Foray, Bea Benaderet, Arthur Q. Bryan (the voice of Elmer Fudd), and Robert C. Bruce (who narrated most of the "travelogue" and "newsreel" shorts of the '40s).

For more detailed information on the recurring cast, refer to the franchise's character sheet.

The cartoons starring this pantheon originated many of the classic Animation Tropes, co-opting or perfecting most of the rest. Being primarily character-driven comedy, with the various stars working and reworking their shticks solo or in combination, their comedic style is firmly rooted in vaudeville, early Broadway, and silent-film slapstick—an ancestry they cheerfully acknowledged: as in Robert McKimson's 1950 short "What's Up Doc?", an Animated Actors look at Bugs's rise to stardom by way of Elmer Fudd's vaudeville act.

The freewheeling house style was also heavily influenced by, well, the house movies. Answering accusations of excessive violence from parental action groups in later years, Jones noted that these shorts were originally intended to ride with such sweet, wholesome family fare as Little Caesar and The Public Enemy. "We didn't make them for kids," he explained. "We made them for ourselves."

Helping the anarchistic spirit along were a succession of humourless bosses that more or less invited open rebellion. Founder Schlesinger won unwitting immortality as the inspiration for Daffy Duck's trademark lisp: "You're dethpicable!". The Warner Bros. themselves really didn't know or care what was going on in their animation unit, leaving hands-on oversight to bean counter Eddie Selzer. Recounting the genesis of the classic "Bully For Bugs", Jones recalled the day Selzer showed up at his door as he and writer Mike Maltese were hashing out story ideas, and bellowed: "I don't want any pictures about bullfights! Bullfights aren't funny!" Then Selzer marched off, leaving his dumbfounded staff staring at each other. "Well," Maltese said, "Eddie's never been right yet..."

Warners ceased production of the classic series in 1963 and outsourced new cartoons to other entities in something of a Dork Age until 1969; a Revival of new production of the classic cartoons occurred during the 90s. Moving to television in 1960 with the original incarnation of the The Bugs Bunny Show, the Warners' shorts took a level in ubiquity. Various repackagings became staples of the American Saturday morning schedule for the next forty years, reintroducing themselves through the generations, until they had permanently entered the collective consciousness.

"Looney Tunes", the generic term by which all Warners animation is now known and sold, is a brand name more than anything nowadays, but is most heavily associated with the "classic" theatrical shorts and only begrudgingly to what's been done to the characters since, e.g. this, this, this, and most emphatically this. This one's okay though. As is this. The Tunes have been the mascots of the Six Flags theme parks for years.

The merchandising for Looney Tunes products ceased production when AOL ended its merger with Time Warner in order to save money (it did the complete opposite), and Cartoon Network hasn't been kind to the Tunes until November 2009, when they began running the classic shorts again. Cartoon Network is even producing a third new set of animated shorts featuring the original characters!

It is impossible to discuss the impact of animation on any culture in the world without mentioning these characters and their famous shorts. They have a global influence equaled only by a certain group of cartoons. Not only by dint of their quality and originality, but by the scope of their exposure, Looney Tunes have influenced every corner of the animated world. In the 1940's in particular, nearly everybody copied their antics—even Disney tried their hands at Warners-esque comedy from time to time!

For a complete filmography of the original cartoons, visit this page. For a taste of the best shorts the series has to offer, refer to The 50 Greatest Cartoons list, as well as The 100 Greatest Looney Tunes list. For the 2011 animated sitcom that premiered on Cartoon Network, go here.

Not to be confused with the prolific Wiki contributor.

For tropes about Looney Tunes in comics, go here.

See also Noteworthy Looney Tunes Staff for info on the many people who contributed to this franchise.

Th-th-th-that's all, folks!
Retrieved from "https://allthetropes.org/w/index.php?title=Looney_Tunes&oldid=1965087"
Categories:
Cookies help us deliver our services. By using our services, you agree to our use of cookies.