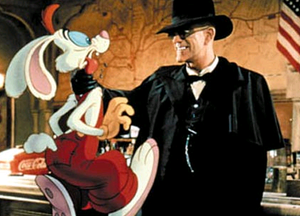 A special effect intended to show live-action, flesh-and-blood performers interacting with animated characters within the context of a work of fiction. If the story is a comedy, and it usually is, the characters tend to be Genre Savvy and recognize each other as belonging to either category. This is one of the oldest special effects in Hollywood (the 1914 animated film, Gertie the Dinosaur, actually had creator Winsor McCay interacting with animated Gertie in real time on a vaudeville stage), and has been done several times with varying degrees of realism, though it was probably perfected by the 1988 Disney / Amblin film, Who Framed Roger Rabbit?.

A sub-category of this trope is any story where cartoon characters are real and exist independently from "real" human beings (which may or may not be set in Toon Town). Since this is such a visual idea, it's not very common in forms of media that lack a visual aspect, although the odd duck does exist.

Another subtrope is to have human characters be live-acted and other animals be animated.

A subtrope of Medium Blending, and an extended version of Rotoscoping.

Examples of Roger Rabbit Effect include:

Retrieved from "https://allthetropes.org/w/index.php?title=Roger_Rabbit_Effect&oldid=1707516"
Categories:
Cookies help us deliver our services. By using our services, you agree to our use of cookies.