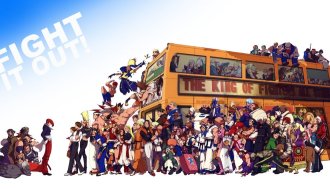 Loads and Loads of Characters indeed. And this isn't even all of them...

The King of Fighters series started out as a crossover fighting game, featuring some of the most popular characters from SNK Playmore's (known as SNK back then) fighting game franchises: Fatal Fury and Art of Fighting, as well as classic SNK games such as Ikari Warriors and Psycho Soldier, splitting them up into teams of three (four in the NESTS Saga), duking it out in one-on-one battles similar to its major competition at the time, Street Fighter.

Although the first game was merely intended to be a Mascot Fighter, the series became more popular than the others that inspired it, and an overreaching plot soon developed that took the other SNK fighters along for the ride.

There are four major Story Arcs:

(More detailed summaries of each arc- and the individual games- can be found in the Analysis section.)

The games were initially released on the (ridiculously expensive) Neo Geo home arcade system, so they had a hard time catching on with North American home gamers, but remained very popular in Japan, as well as with arcade gamers worldwide. It released new editions of the game every year with Madden-like regularity, introducing new characters and rosters into the storyline, while the old characters have seemingly retained their basic sets of special moves throughout the series, probably to dodge the problem of the older games being So Last Season.

In addition to the thirteen games of the main King of Fighters storyline, there are multiple spinoffs, remakes and "dream match" titles (that combine all the characters of that particular saga into one game).

These include Maximum Impact, a 3D Fighting Game series which takes place in an Alternate Continuity, right down to having characters not featured in the main King of Fighters storylines; an RPG that ties the events of 96 with 97; a Bullet Hell spinoff called KOF Sky Stage for the Xbox Live Arcade; and The King of Fighters-i 002, an iPhone game that ties into XIII

Aside from fighting games and tie-ins, there were the rather infamous Dating Sim games for mobiles and Nintendo DS, Days Of Memories allowed the Player Character to venture in Southtown and date most of the fighting divas from the series (and from others); later versions also allowed a girl Player Character to date the male fighters as well.

This is the character sheet. Be warned, the gross amount of characters in this series is taken to an extreme degree.