Felix the Cat: The Movie 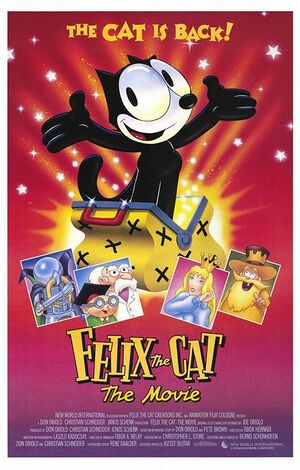 Felix the Cat: The Movie is a feature length film from The Renaissance Age of Animation, starring Felix the Cat, a Funny Animal who walks the earth and happens to own a Magic Bag Of Tricks, who travels into another dimension after being summoned by a sentient teardrop to save the Kingdom of Oriana and its Princess from her Evil Uncle, The Duke Of Zill, and his army of robotic cylinders.

The film was produced by Pannonia Film Studio in Hungary, and directed by Tibor Hernádi. The film is estimated to have been completed in 1986 or 1987, but it only received limited release in 1988 and 1989, finally getting its full release in the United States in August 1991. The film was a box-office failure, due in part to being released in the same month as Disney's Beauty and the Beast, Amblin's An American Tail: Fievel Goes West and Don Bluth's Rock-a-Doodle. Ironically, it received many airings on Disney Channel, which, along with subsequent VHS rereleases, allowed the film to gain a small following.

Tropes used in Felix the Cat: The Movie include:

"Boy, could you use a Big Mac! Uwahahahahaha!"