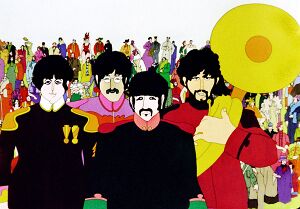 Yellow Submarine is a 1968 psychedelic animated movie that doesn't quite star The Beatles. (Though their songs feature prominently, and they do get a live-action cameo at the end.)

When Blue Meanies attack the strange and magical undersea utopia of "Pepperland", Old Fred is sent off in a near-omnipotent submarine to find help. He ends up in Liverpool, where he convinces Ringo Starr and his three "mates" to return with him. Along the way, stuff happens. Very weird stuff. With Beatles music all throughout and art in the style of Heinz Edelmann, the return voyage and rescue of Pepperland is... quite a 'trip'.

Can the Beatles save Pepperland thanks to The Power of Rock? Or will the Blue Meanies end the free and open dissemination of music, which they are allergic to, once and for all?

A motion-capture remake to be directed by Robert Zemeckis was in pre-production in the late 2000s to early 2010s, but is currently dead thanks to his previous movie flopping.

Tropes used in Yellow Submarine include:
Retrieved from "https://allthetropes.org/w/index.php?title=Yellow_Submarine&oldid=1834294"
Categories: