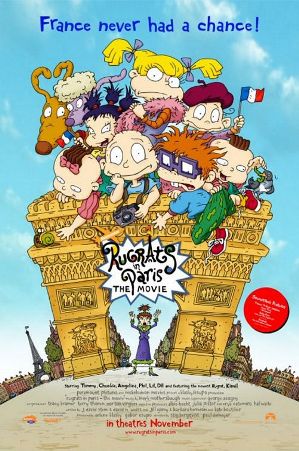 Rugrats in Paris: The Movie is the second of three animated movies based on the Nickelodeon cartoon Rugrats, released between the show's seventh and eighth seasons on television. Topping the introduction of Tommy's brother Dil in The Rugrats Movie, three new series regulars make their debut in this film, as you'll see from the description. It received just as much positive reception as its predecessor, though Your Mileage May Vary on whether or not it is better than the first movie (it certainly wasn't in terms of box office gross).

The plot here is that Chuckie realizes he has an empty void in his life left by the death of his mom, and he finds that he wants a new mom. Meanwhile, a Reptar robot that Tommy's dad Stu made for Paris theme park EuroReptarland (during a 3-part episode of the series that leads into this movie) malfunctions, so he is called to come there for repairs, and he brings all the kids' families with him.

Over in Paris, we meet our villain, Coco LaBouche, and her smarmy sidekick Jean-Claude. Coco is looking to be promoted to president of the Reptar company once her boss, Mr. Yamaguchi, retires. Since Yamaguchi is looking for a candidate who "has the heart of a child", Coco lies to him, saying she adores children and is engaged to a man with a child of his own. When Coco catches Angelica having been eavesdropping on her, Angelica offers to help set her up with Chuckie's dad, Chaz. Coco then pretends to take interest in Chaz and gradually wins him over, but has little luck trying to bond with Chuckie (especially since she shows her True Colors to the kids behind Chaz's back). During their Parisian adventure, the Rugrats meet a girl their age, Kimi Watanabe, and her mother, Kira, an assistant of Coco's, who herself develops a mutual romantic interest in Chaz. (Not to give away the movie's ending, but suffice to say, the fact that they're two of the new characters debuting here should tell you how it turns out.) Also, Tommy's dog Spike falls for a poodle named Fifi. (This isn't particularly relevant to the plot, but since Fifi also becomes a series regular, it probably needed to be mentioned.)

Tropes used in Rugrats in Paris include:
Retrieved from "https://allthetropes.org/w/index.php?title=Rugrats_in_Paris&oldid=1761379"
Categories: