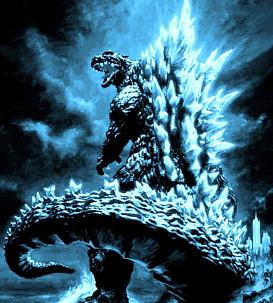 Along with the Western-made King Kong, Godzilla is the classic giant monster of modern fiction. As a Kaiju, time after time the mutated prehistoric reptile has risen from the deep, sometimes to destroy Tokyo, sometimes to save it.

The first film, released in 1954, begins with a series of mysterious shipwrecks. A reporter named Hagiwara is sent to investigate a remote island, whose natives blame the wrecks on a monster from their myths. He goes back a second time with some scientists, and the paleontologist Dr Yamane finds gigantic radioactive footprints.

Yamane soon realises that the legendary monster is real. Godzilla is a gigantic prehistoric sea monster which somehow survived to the present, and has been released by the recent atomic blasts. Naturally, he is heading straight for Tokyo.

The military attempt to stop Godzilla, using tanks and a thirty-meter high electric fence, but they fail. Because Godzilla was created by radiation he cannot be killed by anything less deadly. Godzilla sets the city on fire with his atomic breath, killing thousands and reducing large parts of Tokyo to smouldering rubble.

Fortunately, Yamane's daughter's fiance, Dr Serizawa, has invented an Oxygen Destroyer, capable of killing Godzilla, but he has moral qualms about using it, since the military would use it as a weapon of mass destruction.

After seeing how much damage Godzilla has done, Serizawa does eventually decide to use his oxygen destroyer, but first he burns all his research notes. The navy take Serizawa to the middle of Tokyo bay, where he successfully uses his invention to kill both Godzilla and himself, a Heroic Sacrifice to prevent the oxygen destroyer being misused.

At the end of the film, Yamane says he doesn't believe Godzilla was unique. Another will inevitably appear.

Yamane was correct. The film launched a successful franchise, with several alternate continuities, in which Godzilla has veered from villain to hero to Anti-Hero. The King of the Monsters starred in two Western Animation series -- the not-so-well recieved The Godzilla Power Hour and the more loved Godzilla the Series. Godzilla, along with King Ghidorah and Gigan were even Special Guest in the TV show Zone Fighter.

Toho's Godzilla films are traditionally categorized into three eras, according to when they were made: Showa (1954-1975), Heisei (1984-1995), and Millennium (1999-2004). Each era has its own look-and-feel, particularly in its special effects but also in its plotlines.

Legendary Pictures started a new American era of the series in 2014, focusing on faithfulness to the original material. And there was much rejoicing.

The general interpretation of Godzilla in the original film was of more of a natural disaster, something powerful that can not be reasoned with, but ultimately a sympathetic character who was as much a victim of the atomic age as the Japanese he terrorized. Subsequent films set Godzilla as a heroic ally to the humans or as an evil creature that has to be killed. The 1998 American film portrayed Godzilla as a mostly innocent creature that just wanted to be left alone.

Older Than They Think, because the movie is suspiciously similar to The Beast from 20,000 Fathoms, a 1953 American movie where a nuclear explosion awakens a giant dinosaur that attacks Manhattan. Word of God has it the real inspiration for Godzilla was a far better known monster movie, though a working title for the film was "The Beast from 20,000 Leagues Under the Sea", making it pretty obvious where they got the idea from.

Frequently cameos as a Rent-A-Zilla. May be the only reason you watch a movie, if you're Just Here for Godzilla. When you reach the point when it's time to call him in you have crossed the Godzilla Threshold.

There's an extensive character sheet here that needs a bit of work.

Several video game adaptations of the franchise have been made over the years, with the most recent one released for the PlayStation 4 in 2014.

Films in the Godzilla Franchise include:

These are the titles of the official films. The names vary in regional release -- a lot.

American remake (not technically part of any series)

All Millennium Godzilla films are in their own continuity except the Kiryu saga..

Other Toho films to feature Kaiju and alien invaders

Retrieved from "https://allthetropes.org/w/index.php?title=Godzilla&oldid=1901128"
Categories:
Cookies help us deliver our services. By using our services, you agree to our use of cookies.