Everything About Fiction You Never Wanted to Know.
Jump to navigation Jump to search
/wiki/Jackie Chancreator 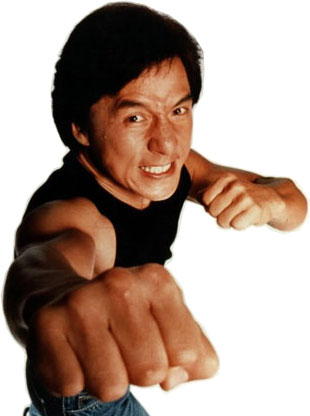 Jackie Chan is, quite simply, Made of Awesome. He has hit the big time since being "discovered" by Hollywood in the mid-90s and films such as Rush Hour, Shanghai Noon, The Tuxedo and The Medallion have made him an American household name.

Chan is best known as a stunt performer and fight choreographer, and really that's the entire point of going to see any of his movies - watching dumbfounded as he does all sorts of insane tricks and stunts in jaw-dropping fight scenes. He reportedly says that he loves action, but hates violence. Rather than being bone-crunching kung fu instead he is heavily inspired by the physical comedy of Buster Keaton and Charlie Chaplin (being that those were silent films, he was able to watch them without a problem with the language barrier). Most of his films are just backdrops to amazing stunts, creative fight scenes and little wire work.

And in case you don't believe it, there's usually a montage of outtakes over the end credits showing things going wrong while filming (go to Youtube and search for Jackie Chan outtakes... and prepare to be amazed!). Often involving ambulances. It's a good thing he's been so successful, because he's gone on record in many interviews as saying that no insurance company in the world will give him coverage. As he's grown older, despite being one hell of a Badass Grandpa at the age of 57, he understandably has stopped doing 100% of his stunts, partly because he has been told that if he falls on his head one more time it will KILL HIM, also in part because in the Hollywood system, insurance for the stars is a must and, as aforementioned, he has a little trouble with that.

Chan has developed a distinctive fighting style, quite comedic and usually making extensive use of props, even those at first sight most unsuited to fighting, such as a ladder stepladder. (Seriously, if you've somehow never seen his work before, you can spend many happy and amazed hours on YouTube watching fight scenes.)

Needless to say, he's been injured fairly frequently. His closest brush with death came from Armour of God when he fell from a tree and fractured his skull. A comparatively "safe" stunt, it was a reminder that he can't be casual about anything he does. Among his injuries he has dislocated his pelvis, broken his fingers, toes, nose, both cheekbones, hips, sternum, neck, ankle and ribs on numerous occasions.

A lesser-known aspect of his career (at least in America) is that he is also a professional singer, having recorded many albums and often performing the Theme Songs for his movies (ex. Who Am I?). This is a little less surprising when you know that he originally trained for Chinese opera, which features acrobatic fight scenes. He also has his own Animated Adaptation, Jackie Chan Adventures.

In the last decade, Chan has been the subject of much controversy in Asia. His political stance that Taiwan should reunite with China earns him few friends outside the People's Republic, but he cannot be accused of not putting his money where his mouth is, because this devastates his box-office profits in Taiwan.

In some parts of the global Asian community, he is also accused of being a sellout to his own culture, pandering to the western market by repeatedly portraying caricatures of the Chinese man. Reportedly advising that the protagonist role in The Forbidden Kingdom, originally intended to be a Chinese-American boy rediscovering his roots, be recast as a kung-fu obsessed white boy is sometimes advanced as evidence for this view. Further rubbing salt in wounds is his compliance to Sony's decision to force the The Karate Kid remake to bear its original title, rather than the proposed The Kung Fu Kid, in spite of the fact that the film is set in China and is about the Chinese martial art of Wushu (aka kung fu). The people who accuse Chan of this are probably right, in that Chan has admitted he does this. He claims he does it for the money, so that he can finance the films he actually likes to make, as well as fund his not-inconsiderable charity work.

It seems possible, however, that the strains of old age may have finally caught up with him, as is painfully evident from Rush Hour 3 onward wherein he is no longer able to perform stunts without the aid of computers that were second-nature to him only 5 years ago. As he has become more and more overshadowed by his younger and more athletic co-stars, as well as trapped by the formula of wholesomeness that the fans have come to expect from him, Chan finally announced that Armour of God 3 will be the last "big action movie" of his career, and intends to go out with a dignified slam-bang of a finale rather than as a faded shadow of his former glory.

When his series/movies is dubbed in Japan, his voice is usually dubbed by Hiroya Ishimaru. In Latin America, he's dubbed by Juan Alfonso Carralero, who also dubs-over for Will Smith and David Hasselhoff.

Anyway, here's a list of some of his most famous and/or best movies. Note that many fans consider his pre-Hollywood movies to be better.

Movies that Jackie has starred in include
Video games starring Jackie Chan include
Jackie Chan provides examples of the following tropes:
Retrieved from "https://allthetropes.org/w/index.php?title=Jackie_Chan&oldid=1931771"
Categories:
Cookies help us deliver our services. By using our services, you agree to our use of cookies.