Steel is the name of several DC Comics superheroes, though the best known is the third.

The first Steel debuted in the series Steel, The Indestructible Man in the 1970s (though it was set in World War II.) Henry "Hank" Heywood was an American soldier who, after being badly hurt, was remade as a cyborg with "indestructible" skin. Still having a human appearance, he developed a secret identity as a superhero wearing a costume based on the American flag. He first appeared in Steel, The Indestructible Man #1 (March, 1978), created by Gerry Conway and Don Heck.

The original Steel series only lasted 5 issues, ending in November, 1978. The cancellation was part of the so-called DC Implosion, the abrupt end to over 24 series. The character was not forgotten. He became a regular in the All-Star Squadron, a series devoted to Golden Age heroes. Using the alternative codename Commander Steel. In the "present" day, Hank turned very much alive in 1980s tales of the Justice League of America. He went on to become one of several heroes fighting against Eclipso, in a series spotlighting this villain. He was finally killed in Eclipso #13 (November, 1993).

The second Steel was Henry "Hank" Heywood III, a grandson of the original. He debuted in Justice League of America Annual #2 (October, 1984), created by Gerry Conway and Chuck Patton. He was part of the Justice League of America during the series' infamous "Detroit" period. Having suffered an accident, his grandfather -now a rich corporate head- had him rebuilt as a similar cyborg and goaded him into becoming a hero; he also provided the League's new headquarters.

Sadly the younger Steel had to retire when severely wounded in Justice League of America #260 (March, 1987). He was left surviving on life support. He was Killed Off for Real in Justice League America #38 (May, 1990). His old foe Despero located the comatose body of Hank and "shredded him limb from limb."

Henry has been used in subsequent years. But only in retro tales set in the Detroit period, or tales involving time-travel, or undead characters. A third Heywood went on to join the reformed Justice Society of America, but as Citizen Steel, to distunguish him from John Henry Irons. 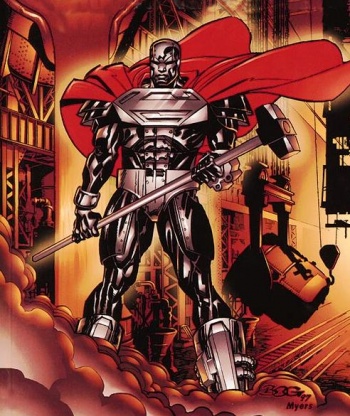 The third Steel was created for The Man of Steel series, which normally starred Superman, during The Death of Superman storyline. DC had decided to delay bringing Superman back to exploit the success of this event, but that left them without a protagonist for Superman's four titles. Their solution was to create four Superman pretenders and make a mystery of which one of them could be the real Superman Back from the Dead. (It's also possible that DC wanted to make sure they didn't lose the trademark to the name "Steel" from lack of use.)

In any case the character first appeared in The Adventures of Superman #500 (June, 1993), created by Louise Simonson and Jon Bogdanove. This Steel was really John Henry Irons, a construction worker whose life had been saved by Superman once, and who decided to become a hero to uphold his legacy. In addition, he was actually a former weapons designer hiding from the government; the use of weapons he had invented by some street gangs was also part of the reason why he created a suit of Power Armor to fight crime with (along with a really big hammer.) There was also a hint that Superman's not-quite-dead soul had linked to Irons, keeping a hold on this world before returning to life. Of the other three beings claiming the title of Superman, Steel was also the only one who freely admitted that he was not Superman, but was working to uphold his legacy in his honor.

Steel was also obviously partially based on the legend of John Henry, and happens to be the first black character to be major part of the Superman mythos (though his armor hid this fact from the public.) Later on, Steel would join the Justice League of America, and his identity would become public. His niece Natasha, who like him was a Gadgeteer Genius, also became a power-armor heroine (and later gained actual powers as part of an Evil Plan by Lex Luthor in the series 52.)

Steel starred in his own comics series for 52 issues, from February, 1994 to July, 1998. He had a movie based on him (starring Shaquille O'Neal) that however cut off all Superman references. Steel has also appeared in Superman: The Animated Series and theanimated Justice League cartoon. The animated version also had to have his origin tweaked, because The Death of Superman never happened in S:TAS.

Tropes used in Steel include:

Tropes regarding the first Steel:

Tropes regarding the second Steel:

Tropes regarding the third Steel:

]
Retrieved from "https://allthetropes.org/w/index.php?title=Steel&oldid=1846518"
Categories:
Cookies help us deliver our services. By using our services, you agree to our use of cookies.