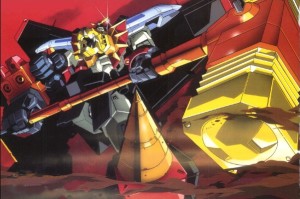 My other hammer crushes suns.

Hammers used in battle. They come in different sizes, from squeaky mallets to giant sledgehammers. The lighter ones inspire laughs, while the bigger ones inspire terror. Some are thrown, but most are used to pound things into a bloody smear in the ground. It sometimes comes with Shock and Awe due to a certain thunder god.

Used by The Big Guy, the Mighty Glacier, and the Cute Bruiser. Also a favorite of clerics in High Fantasy settings, smashing someone's head in with a hammer often lets them get around the "no spilling of blood" rule enacted by their gods. But really, blunt damage can easily cause bleeding. Imagine breaking a bone with a hammer: there will be blood involved.

The truth is the less inventive fact that warhammers, along with other blunt force weapons like maces and flails, were far more effective against heavy armor than blades. Real European warhammers featured a beak-like spike on one side for piercing armor, and a flat hammerhead or set of blunt claws on the other for crushing helmets. They bear no resemblance to the massive sledgehammers often featured in various fantasy games, and aren't seen as frequently in fiction. As armor became heavier and more widespread, the use of warhammers rose as well. It is fairly common for characters who use sledgehammer-types as their weapon of choice to be black, probably due to the influence of American folk hero John Henry & African demigod Makoma... Or, less likely, MC Hammer.

See also the Hyperspace Mallet, the Weapon of Choice for cartoon animals seeking to inflict Amusing Injuries (as well as the angry Anime female's favorite tool against perverts and other sources of irritation). Also see Carry a Big Stick for other kinds of bludgeoning weapons. Not to be confused with When All You Have Is a Hammer, although you can achieve this with a hammer if it's the only thing you have to work with.

Examples of Drop the Hammer include:

Retrieved from "https://allthetropes.org/w/index.php?title=Drop_the_Hammer&oldid=1941075"
Categories:
Cookies help us deliver our services. By using our services, you agree to our use of cookies.