Take Up My Sword 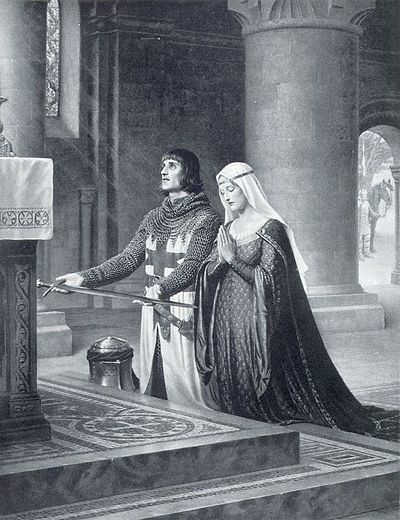 The Hero has been progressing in his quest against the Big Bad. Then he dies. Wait! What?! That's not supposed to happen! (I guess in this story Anyone Can Die.)

Well, now what? Do we have a Downer Ending, and The Bad Guy Wins? No, no, we need a replacement Hero. Someone who will take up The Hero's sword (and other weapons) and go on to defeat the villain. This can be literal, invoking It Was a Gift, or metaphorical. When it's not only literal but the MacGuffin, see the subtrope I'm Dying, Please Take My MacGuffin.

Most often used at the beginning of a show, to explain exactly how some callow youth loser got the job of defeating the Big Bad. In this case it was a head fake that had you thinking the Obi Wan was actually The Hero. Occasionally done with the original Hero as a ghost or shade, unable to rest until someone completes his aborted quest.

When it happens later in the season (or in later seasons) it can be a real shocker. May feature in Dying to Be Replaced.

Occasionally used at the ending, to slightly sweeten the tragedy by showing that someone will continue the fight.

When it happens to superheroes or supervillains, it is often the case of Legacy Characters.

In military situations, often combines with a Field Promotion by the dying hero.

Related to Her Heart Will Go On, Determined Widow, Taking Up the Mantle and Bequeathed Power. In its darker forms, leads to Feuding Families, or may be a genesis to, or simply another stage in, the Cycle of Revenge.

If the hero remains alive but no longer is an active hero, for any reason, this is Passing the Torch. Also see Decoy Protagonist and The Chooser of the One.

When listing examples, remember that it has to be more than the literal "someone gives someone else a weapon" part to qualify.

Examples of Take Up My Sword include:

Retrieved from "https://allthetropes.org/w/index.php?title=Take_Up_My_Sword&oldid=1913990"
Categories:
Cookies help us deliver our services. By using our services, you agree to our use of cookies.