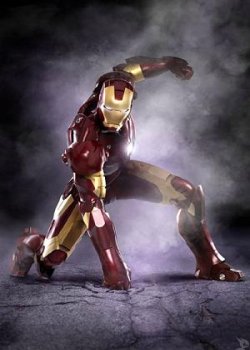 Fast. Bulletproof. Sleek. And even solved the icing problem.

The Knight in Shining Armor's fashionable protective wear does well enough against swords and arrows, but what do you do when one has to face bullets, missiles, and Death Rays - or worse, Big Creepy-Crawlies are invading your planet? Power it up, of course! Powered Armor is a Sci Fi version of the iconic medieval plate armor, frequently used by Space Marines.

Powered Armor typically amplifies the movements of its wearer, adding its strength to theirs in a sort of purely mechanical Synchronization. As the page quote says, they also tend to be a self-contained environment, allowing the user to exist comfortably in space, underwater, or in other areas that would kill unprotected humans. They can often fly, at least for short distances or via rocket-assisted jumps. If this gives them good mobility and speed then the users often join the Lightning Bruiser camp. And most importantly and as the name implies, the amplified sturdiness and strength allows the wearer to don thick slabs of armor rendering them at least highly resistant to small arms with little encumbrance or exertion.

Some versions have other useful gadgets built in as well; too much of this can result in them becoming a sort of wearable Do-Anything Robot. With crystals. Of course, some suits of Powered Armor are explicitly made to be Adaptive Armor capable of great versatility. If it does this with weapons, then it's a wearable Swiss Army Weapon; expect at least one of these to be an Arm Cannon, or possibly a Power Fist. Shoulders of Doom (and in turn, Shoulder Cannons) are almost mandatory. It usually is at least Immune to Bullets or whatever else is used in Five Rounds Rapid in the local 'verse; superior models may mount Deflector Shields allowing it to tank damage well above its apparent weight class. Some of these double as life support units, as is the case for the Man in the Machine. Sadly, they can't remove their suits without risking death.

Powered Armor is distinct from Clothes Make the Superman in that it is specifically designed for combat and is clearly armour rather than clothing. Distinct from Humongous Mecha in that 'Powered Armor is a suit worn on the body, while Humongous Mecha are vehicles that are controlled, either from a cockpit or with some Unusual User Interface. There are, however, the occasional mecha that sit on the line between Humongous Mecha and Powered Armor. A really advanced set of powered armor will usually be made of Nanomachines that make the hero into a Chrome Champion. The change may even be Instant.

If the armor cannot be removed, then it is a Clingy Costume.

Note that unlike Humongous Mecha, Powered Armor actually could be useful, especially in urban battles where tanks (or four-story robots) would be limited in movement. There's also a number of different civilian uses for a suit that makes you strong enough to lift a car.

The usage of Powered Armor in fiction is famous enough for That Other Wiki to have an article on the subject (though its examples list makes it look more like an All The Tropes page). Currently, the US military is conducting experiments with equipment similar to power armor, perhaps making this a future Truth in Television.

Not to be confused with Mini-Mecha, where despite the machine's size, the limbs are still fully mechanical.

Examples of Powered Armor include:

Retrieved from "https://allthetropes.org/w/index.php?title=Powered_Armor&oldid=1875530"
Categories:
Cookies help us deliver our services. By using our services, you agree to our use of cookies.