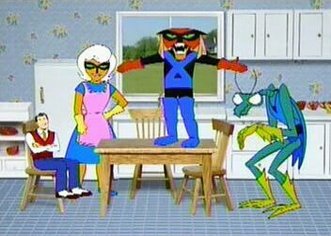 The Brak Show (2000-2003) was a very surreal Quarter Hour Short on Adult Swim, parodying Dom Coms, set (sort of) in the Space Ghost Coast to Coast universe. The show starred Brak and Zorak as high school students in a suburban neighborhood.

It was animated by Wild Hare Studios, which animated Aqua Teen Hunger Force for its first two seasons. Clay Martin Croker, who played Zorak, was also the animation director for both series. It ran for two fourteen-episode seasons before it was unexpectedly cancelled, with viewers not finding out till the end of the episode.

Tropes used in The Brak Show include:

Retrieved from "https://allthetropes.org/w/index.php?title=The_Brak_Show&oldid=1749731"
Categories:
Cookies help us deliver our services. By using our services, you agree to our use of cookies.