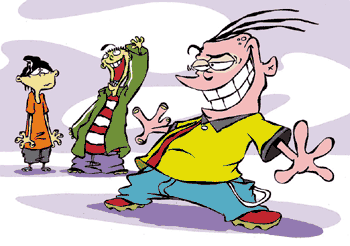 From left to right: Edd, Ed and Eddy.

Three friends, one name, and barely a clue amongst them: that's the concept behind Cartoon Network's Ed, Edd n Eddy, a show about the misadventures of some not-so-ordinary kids in an ordinary suburban cul-de-sac. The show was created by Canadian Danny Antonucci (creator of MTV's short-lived series The Brothers Grunt) during The Renaissance Age of Animation. It lasted from January, 1999 to November, 2009. A total of 65 regular episodes, 4 specials, and a television film.

Ed is a lovable lug who possesses superhuman strength, subhuman intellect, and an odd obsession with chickens; he also enjoys drinking gravy and the odd spot of buttered toast, with a strict diet of b-movies sandwiched in. Edd aka "Double D" is a nerdy Neat Freak who collects insects, labels everything in his room, and communicates with his ever-busy parents via sticky notes. The group is rounded out by Eddy, a smug con artist who manipulates his enemies (and friends, in many cases).

In most episodes, the title trio tend to twist and trounce the truth in order to scam the other kids of the cul-de-sac into giving up their hard-earned allowances in the name of purchasing comically oversized jawbreakers (the holy grail of candies, of course). Because of this, the Eds frequently run afoul of the other kids in the neighborhood.

No characters outside the core twelve appear, though they are frequently mentioned. This was especially silly once the Eds and their friends were shown going to school in the final season; even though it was supposed to be swarming with teachers and other students, we never see anyone apart from the characters (unless in exceptional conditions, where they are still Faceless Masses).

Much of the humor is character/situation-driven, based on the absurdity of the situations the Eds and the rest of the kids find themselves in. A mix of slapstick, word play, and surrealism, the series ended up becoming the channel's longest-running series in terms of years on-air.

Recap pages are now beginning construction, starting with the pilot, the second episode, and third episode.

Tropes used in Ed, Edd 'n' Eddy include:
Retrieved from "https://allthetropes.org/w/index.php?title=Ed,_Edd_%27n%27_Eddy&oldid=1849489"
Categories:
Cookies help us deliver our services. By using our services, you agree to our use of cookies.