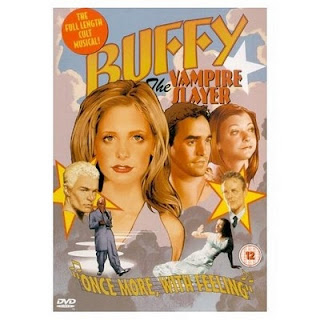 Once in a while, a show will shake things up and do Something Completely Different. One way of doing that is by turning the show into a The Musical for an episode.

A Musical Episode is structured around the cast breaking into song (and possibly dance) throughout the episode. It might use an in-universe justification, such as a Battle of the Bands, some sort of weirdness, or a new character causing all this cheery singing. Alternately, it can play like a Broadway show where it's just taken for granted that some events will be dramatized through song and dance.

Opinions on a Musical Episode can differ wildly. Many will enjoy the up-beat, unexpected change of pace, while many will dis-like it for that very reason. Also, like any premise, the songs and choreography have to be good, or else you're doomed from the start.

Examples of Musical Episode include:

Retrieved from "https://allthetropes.org/w/index.php?title=Musical_Episode&oldid=1953882"
Categories:
Cookies help us deliver our services. By using our services, you agree to our use of cookies.