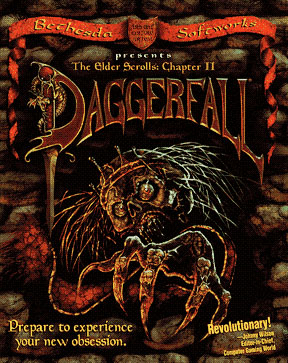 "Rest well this night, for tomorrow you sail for the kingdom... of Daggerfall."
—Introduction

The second game in The Elder Scrolls series, released for PC in 1996, Daggerfall takes place in the region around the fictional Illiac Bay where several petty kingdoms are vying for power in the wake of the increasingly-absent Empire which rules them all.

In the kingdom of Daggerfall the local King Lysandus, a personal friend of The Emperor of the Cyrodiil Empire of Tamriel, has died. Despite seeming to be a good person with no regrets, he comes back as a powerful ghost and terrorizes his capital every night. Troubled by these accounts and in light of the bickering factions, The Emperor has sent a letter to his Lysandus' wife but it became lost in transit. Deeply troubled due to the letter's sensitive contents, he sends the player character to investigate both events, sweeping him into the complex politics of the Illiac Bay.

Daggerfall saw the series' transition into full 3D. The world is "mostly flat with some hilly and mountainous areas" but the cities themselves feature solid houses and walls that are climbable and the dungeons just revel in the fact that you can cross over your own path on three or four different levels. Daggerfall is also the last game where Bethesda Software implemented procedural generation as a major part of the game. The size of the game world is massive and they really wanted to implement a go anywhere and do anything feel, limited only by time constraints and a legendary inability to keep the game stable and store things in cabinets. The game has multiple endings; the game has multiple routes to get to those endings; and, there are many things to do, as long as you didn't miss your appointment.

Daggerfall has been re-released as freeware by Bethesda along with its predecessor Arena to commemorate the fifteenth anniversary of The Elder Scrolls series. It can be downloaded at their website and will work, though a variety of technical tricks may be required (You can also get a version that will automatically set up). Its successor is The Elder Scrolls III: Morrowind.

A source port-like clone, called DaggerXL, is currently in development.

Tropes used in The Elder Scrolls II: Daggerfall include:
Retrieved from "https://allthetropes.org/w/index.php?title=The_Elder_Scrolls_II:_Daggerfall&oldid=1653027"
Categories: