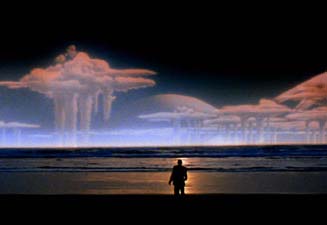 There has been a malfunction in Project Flashlight, with devastating results.

You've used the Time Travel machine on "random", "borrowed" the professor's rocket ship, or walked through the strange glowy doorway. OK, everything seems normal, but for some reason you can't get your bearings. When you look up... it's an Alien Sky.

Used to bring home the fact that the heroes (and viewers just tuning in) are in another world! Maybe there are two moons. Perhaps Earth's all-too-familiar moon, the one in all the love songs, is broken into so many pieces it's become a ring of debris around the planet.

Having the moon orbit huge gas giants like Jupiter or Saturn that dominate the sky isn't rare, either. In the daytime, the sky could be a lovely shade of purple instead of blue, the sun could be a different color, or it could have a little and a bigger brother.

Sometimes used to comedic effect when our heroes just won't believe they've left Earth for good, and shrug off all other, often painfully obvious, hints as some kind of Masquerade ("Wow, great special effects! I'm on hidden camera, right?").

See also Sci-Fi Writers Have No Sense of Scale, which is sometimes invoked for some of the more bizarre sky-types. Compare Zeppelins from Another World. The sub-trope Binary Suns is a specific example.

Examples of Alien Sky include:

Retrieved from "https://allthetropes.org/w/index.php?title=Alien_Sky&oldid=1834666"
Categories:
Cookies help us deliver our services. By using our services, you agree to our use of cookies.