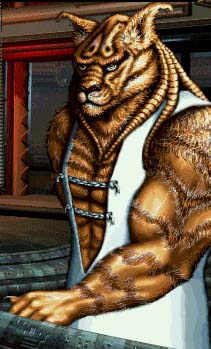 Catfolk are Fantastic Sapient Species that are based on felines. They generally have a body type resembling felines to one degree or another, and are sometimes named after Real Life feline species. They can be science-fiction aliens or fantasy races. In terms of appearance, they can fall anywhere on the Sliding Scale of Anthropomorphism from fully animal looking to barely non-human, however they must be sapient, non-human, and a distinct species from Real Life animals. Unlike Catgirls, Catfolk have no particular tendency toward being female.

While Catfolk have been depicted with a variety of behavioural and cultural characteristics, it is common to base at least some of their behaviour on feline Animal Stereotypes. Catfolk based on large predatory cats, such as lions, tigers, and panthers,[1] are generally depicted as being exceptionally strong and aggressive, with a Proud Warrior Race culture. Those based more around domestic cats are often depicted as selfish, arrogant and vain, with their fighting styles bent more towards dirty fighting, speed and agility.

This is closely related to Intelligent Gerbil (science fiction aliens based on animals), Petting Zoo People, and Little Bit Beastly. There can be overlap between this trope and Catgirl, however only examples of Catfolk that fall under Little Bit Beastly should also be listed under Catgirl; Catgirl examples should only be listed here if they represent an entire distinct species.

Feline Therianthropes and humans that shapeshift into cats are Werecats. Humans that are dressed as cats have on a Cat Eared Headband. Cartoon Funny Animals and Talking Animals are not this trope, as they are intended to depict Real Life animals, however anthropomorphic they may be.

Not to be confused with the movie Cat People or the Cat Person series of Internet shorts.