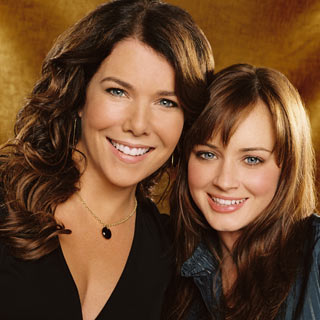 The show's central premise is this: the titular Gilmore girls are, more or less, two sides of the same coin. Mother Lorelai was born to privilege, but saw her education cut short by her pregnancy at 16. Daughter Rory, despite having been born in comparative poverty, is a gifted student. Both women are intelligent, witty, cynical, cute, and comically dysfunctional when it comes to men.

The main characters are complemented by a strong ensemble in the townsfolk of Stars Hollow, Connecticut, including an assortment of Nosy Neighbors: town selectman Taylor, who rules with an iron fist; Kirk, the village idiot who has dabbled in hundreds of professions; and Luke, owner of the town diner, who enjoyed a protracted Will They or Won't They? with Lorelai for four seasons before they finally "did it" in an early fifth season episode.

What really sets Gilmore Girls apart from other shows of its type is the heavy use of clever, fast-paced wordplay. Really fast. Think Aaron Sorkin on crystal meth and Seinfeldian Conversations.

Most episodes employ some form of Two Lines, No Waiting following the exploits of mother and daughter, though in later seasons, the plots more often alternated between the two from episode to episode.

The show also seems to take a particular interest in music. In addition to a number of music-obsessed characters, numerous musicians--including Sebastian Bach and Carole King--have held recurring guest roles. Others, like Paul Anka and Sparks have had cameos or guest spots.

Now has a character sheet. Character-specific tropes should go there.

Tropes used in Gilmore Girls include:
Retrieved from "https://allthetropes.org/w/index.php?title=Gilmore_Girls&oldid=1832278"
Categories:
Cookies help us deliver our services. By using our services, you agree to our use of cookies.