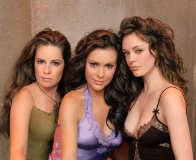 The Power of six Three will set you free.

A show that ran from 1998-2006 wherein three San Francisco based girl-power oriented witch sisters vanquish demons through the triple powers of CGI, rhymes, and lots of cleavage, whilst dealing with personal relationship drama.

Charmed was moderately successful, with a cast of beautiful women and hunky guys. It experienced a Series Fauxnale in the seventh season, only to be brought back for an eighth season and a series finale that many fans believed was one of the best episodes of the series, despite the general dislike for season eight overall (mainly due to the introduction of Billie, a supposed-to-be replacement witch for the sisters).

The series successfully returned in comic book form in 2010 thanks to company Zenescope, receiving mixed to positive reviews from fans & critics alike.

Tropes used in Charmed include:
Retrieved from "https://allthetropes.org/w/index.php?title=Charmed&oldid=1860251"
Categories:
Cookies help us deliver our services. By using our services, you agree to our use of cookies.