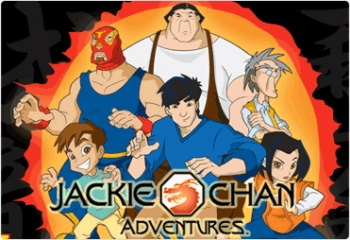 Well, there is the small matter of being hired by a secret U.S. government organization called "Section 13" (No, not that one), dedicated to dealing with hyper-criminal elements that the normal police are no match for.

...did I mention that said elements are ruled by an Ancient Demon that's trying to escape his prison within a statue?

In the first episode, Jackie retrieved a magic talisman that bestows unique powers to the individual holding it. After being attacked by minions of The Dark Hand criminal organization, Jackie is contacted by Section 13, led by his old friend Captain Black.

Jackie and the quirky "Uncle" are hired by Captain Black for their knowledge on ancient artifacts and magic. They are trying to stay one step ahead of the Dark Hand, who are looking to take Jackie's talisman and unite it with others to complete a set that will awaken the demon Shendu. (Not for worship, Shendu promised them one-of-a-kind treasures)

Add Jackie's niece Jade, newly arrived from China, to join him in his adventures. She will stick her nose in anything and everything, and neither Jackie nor Uncle can stop her.

As the series progressed, eventually it fell into a routine each season with a Big Bad searching for a set of magical artifacts. They are, of course, scattered across the world. There were, however, standalone episodes scattered about.

Jackie Chan Adventures is debatably Chan's most successful American effort: it ran five seasons, albeit with Chan Not Quite Starring in the title role, with equal parts comedy and action, the entire show was very much like an animated and magic-heavy version of a Jackie Chan film. He also didn't have to share the spotlight with an English speaking actor like Chris Tucker or Owen Wilson. He did get overshadowed by a little girl, though...

Tropes used in Jackie Chan Adventures include:
Retrieved from "https://allthetropes.org/w/index.php?title=Jackie_Chan_Adventures&oldid=1939802"
Categories:
Cookies help us deliver our services. By using our services, you agree to our use of cookies.