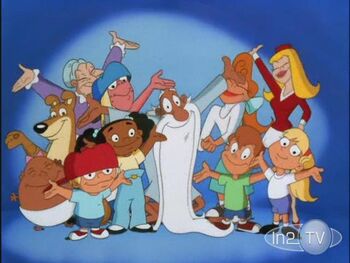 Warner Bros' Histeria! was one of several shows created in part as a result of the FCC deciding in 1996 to start enforcing the 1990 Children's Television Act that required a certain percentage of "informative" and "educational" programs; it premiered on Kids' WB! in September 1998. But having come from the creators of Tiny Toon Adventures and Animaniacs, this show, which centered on comedic sketches loosely based on historical events and topics, was actually pretty much the best show to come out of the CTA. Unfortunately, probably because it came out at around the same time as the Pokémon anime, barely anyone realized this when it was originally airing, and thus didn't bother to watch it much. (But we did!)

One season (52 of the planned 65) of episodes were produced before the show was cancelled over budget concerns (i.e. being $10 million over it), then were repeated numerous times for the next three seasons before being taken off the network in 2001. Unlike its predecessors, Histeria! did not reappear in syndication on Cartoon Network or Nickelodeon. The show would've been forgotten altogether (But not by us!) if not for the fact that, in 2006, it reappeared as part of the initial lineup of Time Warner's In2TV channel until they were inexplicably removed in January 2009.

Tropes used in Histeria! include:
Retrieved from "https://allthetropes.org/w/index.php?title=Histeria!&oldid=1853899"
Categories: