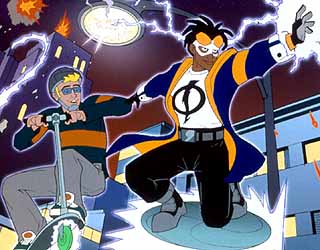 "The name's Static! I put a shock to your system!"

Based upon the Milestone Comics series simply titled Static, created by Dwayne McDuffie, and one of the rare instances where a comic book's creator is also the main creative force behind the Animated Adaptation. The main character, Virgil Hawkins, is the son of a man who runs a youth center. When a bunch of experimental gas explodes, it grants him and some other teenagers a wide variety of offbeat superpowers (it also mutates various animals and at least one fungus). This event is later referred to as "the Big Bang" and the mutant metahumans are known as "Bang Babies," as the Big Bang was the start of their new lives.

Virgil has been best friends with Richie Foley for years, although there is friction when Richie's father is revealed as a racist. In the cartoon, it is later revealed that Richie is a Bang Baby as well; he's become a technical genius and adopts the superhero moniker Gear. In the comics Virgil had a different friend named Richie who was openly gay; Word of God states that the two Richies are not the same character, but the Richie from the series is likewise gay.

Adam Evans, a.k.a. Rubberband Man, a shapeshifter who initially appeared as a villain, is another major character. During the course of the series, he reformed and became a good guy, even dating Virgil's sister at one point. There were other villains and supporting heroes, some more interesting than others.

In later seasons, the show began to slide away from its original characteristics. Many later episodes focused on celebrity guest-stars and featured real-life athletes in primary roles, occasionally as super-heroes themselves. The show became less about gangs as time went on, regularly featuring Anvilicious aesops. At the same time, almost all traces of gang warfare and other urban issues were dropped, in favor of having Static go up against random metahumans or teaming up with another superhero every week.

There were a few crossovers between Static Shock and other DC Animated Universe series, despite the fact that the original Milestone comics weren't set in The DCU. Early episodes openly portrayed characters like Superman to be entirely fictional, and even had Virgil talking about Clark Kent as a secret identity like it was nothing; in the second season, however, they had the two-parter "The Big Leagues", a crossover with Batman: The Animated Series where the Joker comes to Dakota, with the Dark Knight soon on his heels. Later episodes also featured Superman, the Justice League, a separate appearance by Green Lantern John Stewart, an episode based around a Harley Quinn and Poison Ivy team-up and even a trip to the future of Batman Beyond, where Static meets his future self (now considered one of the most powerful heroes on the planet). Going the other way, Static himself makes an appearance in the Justice League Unlimited first season finale.

Tropes used in Static Shock include:
Retrieved from "https://allthetropes.org/w/index.php?title=Static_Shock&oldid=1750419"
Categories:
Cookies help us deliver our services. By using our services, you agree to our use of cookies.