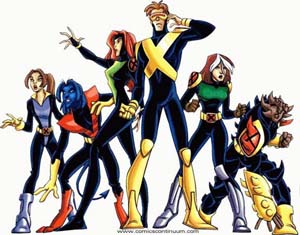 X-Men: Evolution (2000-2003) was an X-Men animated series that, like Marvel's Ultimate Universe and the movies, rebooted/retooled the universe to one where many important characters were teenagers. This show's setting was Bayville, a generic, fictionalized town in New York (not California, as often assumed), where the famous mutants went to school along with more mundane folks (presumably because the X-Men's canonical hometown, Salem Center, is upper-class in the real world).

While the previous (and very popular) X-Men series spent a lot of time condensing the mythology of the long-running comics, this series purposefully tried to go its own way. It was an effort to not bog the story down to Continuity Lock Out and keep most stories individualized. The animation and story scripting was consistently high but it was also impossible to ignore the Spinoff Babies vibe, though it was nice to see a franchise supposedly based around a school for mutants actually spend time in school for once.

The series started off mostly going with the With Great Power Comes Great Responsibility theme, while later seasons started to get more into the "outcasts and racism" topics that permeated the regular X-Men stories. The writers eventually tried to address these concerns in the last season by bringing it more in line with familiar X-Men storylines, and even teased at the regular comics continuity in the Grand Finale.

Does have the distinction of producing the Canon Immigrant X-23, and a more openly sympathetic take on The Brotherhood as a group of Jerk with a Heart of Gold street kids more than absolute evil. And while it isn't responsible for creating Kitty "Shadowcat" Pryde, this series did help popularize her with the non-comic readers.

Here's a character sheet for more in-depth bios and tropes of the characters.

Tropes used in X-Men: Evolution include:
Retrieved from "https://allthetropes.org/w/index.php?title=X-Men:_Evolution&oldid=1779827"
Categories: