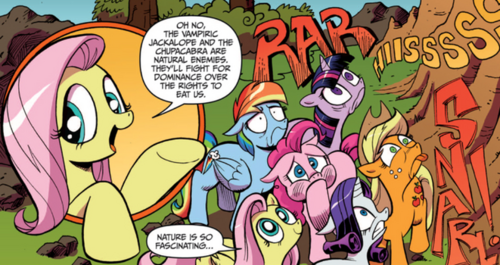 The Dreaded Killemall rises from the deep and stomps through Manhattan, squishing everything in its path! Alice starts to panic. Charlie braces himself for a futile last stand. And Bob is.... grinning like a loon?

"It's the rare Purple Killemall! I knew they existed! It can generate enough force per square foot to crush iron. How cool! It could destroy us and never even notice!"

Alice and Charlie exchange worried glances, terrified that their friend has gone off the deep end... but no. Bob has spent his lifetime researching Killemalls. Or he has the only copy of a book that describes them and has always wanted to see them. Or he risked his reputation on the fact that they exist and now is vindicated.

Never fear, viewers: Bob's fanboy trance will last only a moment and then he will swiftly come up with a plan to defeat the Killemall, or it will turn out that he knows its one weakness.

Obviously this trope can apply to more mundane threats, usually natural (like tornadoes, or sharks).

Examples of Admiring the Abomination include: