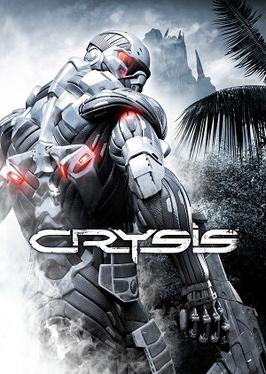 In the year 2020, an alien structure has been found buried in an island in the South China sea. The US army sends Raptor Team, a group of Delta Force soldiers equipped with multifunctional Nanosuits, including the Player Character Jake "Nomad" Dunn, to rescue the archaeologists who found it and then were taken captive by North Korean forces. However, the aliens are not friendly to either side, and Nomad must combat both the North Koreans and the aliens.

Released in 2007, Crysis features the same open-ended style of meeting objectives that appeared in Far Cry. It also is ridiculously future-proof: if you can run it on maximum settings and still get good performance, you probably won't need to worry about the system requirements of another game for a good while. Allow us to express a desire for your computer.

An expansion Crysis Warhead has since been released in 2008, putting the player in the role of Major "Psycho" Sykes through the timeline of the original. A touted feature of Crysis Warhead, turned out to be surprisingly true, is improved performance on higher graphic settings.

Bridging the gap between Crysis 1 and Crysis 2, we have a comic miniseries that follows Raptor Team directly after the end of Crysis. It ties in neatly with both games, and explains quite a bit about the setting and background.

Crysis 2 is set three years after the first game and released in 2011. Written by Richard K. Morgan of Altered Carbon fame, the game opens up with a plot about an alien virus infecting the citizens of Manhattan, riots breaking out, and eventually cuts to the viewpoint of a man codenamed "Alcatraz" and his Marine squadmates sent to rescue Dr. Nathan Gould, who is trapped somewhere in Manhattan. However, their submarine gets attacked on the way, and Alcatraz himself barely survives before being rescued. From thereon, it's up to Alcatraz to figure out what in the world is happening on Manhattan, and why human paramilitary forces are out to kill him and seemingly everyone else that moves in the name of containing the infection.

Crysis 3, the final game in the current trilogy, was released in 2013, with Crytek assuring enthusiasts that the game would not be as graphically neutered as its predecessor and would combine the jungle setting of the first and (what's left of) New York. The story, set in 2047 involves Alcatraz and Prophet fighting the remnants of CELL and new Ceph through the overgrown ruins of New York. There's a city-sized dome and a bow involved.

It's novelized in Crysis: Legion by Peter Watts, which greatly expands on the story and nature of the Nanosuit, and adds an (un)healthy dose of Watts' hard-science Nightmare Fuel. Crysis: Escalation, another novel this time by Gavin G. Smith, bridges the gap between 2 and 3.

A remaster of the first game came out in 2020. Remasters of the subsequent two followed in 2021.

A fourth instalment was announced in 2022. No further details are available as of this writing.

Tropes used in Crysis (series) include:

Retrieved from "https://allthetropes.org/w/index.php?title=Crysis_(series)&oldid=1957418"
Categories:
Cookies help us deliver our services. By using our services, you agree to our use of cookies.