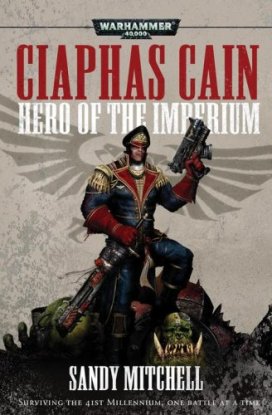 Covers Always Lie. But this time, they're doing it deliberately.

COMMISSAR CIAPHAS CAIN, HERO OF THE IMPERIUM!!! is the protagonist of a series of novels by Sandy Mitchell, set in the Warhammer 40,000 universe. Where Gaunt's Ghosts is Sharpe meets 40K, Ciaphas Cain is something between Blackadder and Flashman in the gothic SF world of Warhammer 40K. Taking a tongue-in-cheek approach to the normally absurdly Grim And Dark 40K universe, the series follows the exploits of a cowardly, self-hating Commissar, in charge of morale and discipline in the Imperium's army, who has managed to not only survive the front lines of the ultimate World Half Empty, but prosper. Over the course of the series, Cain becomes a massively acclaimed Hero of the Imperium, partly through opportunism, skill and minor heroism, but mostly through sheer blind luck. Sent to progressively more insanely dangerous warzones as his reputation grows, Cain actually wants nothing more than to find a quiet place to hide from the fighting.

In short, he's the type of person guys in his profession are supposed to shoot.

That is, if you believe him. The author himself has stated that he doesn't know whether Cain is the Dirty Coward he presents himself as, or doesn't give himself enough credit.

The novels are presented as sections of Cain's private memoirs, organized, edited, and footnoted by Inquisitor Amberley Vail, Cain's occasional liaison both professionally [1] and personally.

Ten novels and nine short stories have so far been published:

Tropes used in Ciaphas Cain include:

As part of the Warhammer 40,000 universe, the series involves a large number of the tropes on that page, as well as employing literary and narrative tropes of its own.

Retrieved from "https://allthetropes.org/w/index.php?title=Ciaphas_Cain&oldid=1704829"
Categories:
Cookies help us deliver our services. By using our services, you agree to our use of cookies.