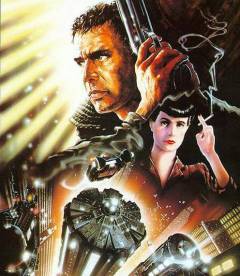 Blade Runner is a genre-bending 1982 Science Fiction film that borrows stylistic elements from Film Noir and Hardboiled Detective fiction. Set in a dystopian near-future City Noir version of Los Angeles, it established much of the tone and flavor of the Cyberpunk movement and the film style of Tech Noir. It is a highly intelligent film, visually stunning and features a seriously great script. The definitive high-def/Blu-Ray Directors Cut came out in 2007.

Deckard is a Blade Runner. His job is to "retire" renegade Replicants: rogue androids that are not supposed to be on Earth. Some of the most advanced Replicants yet have escaped, and Deckard is assigned to retire them. But they are so like normal humans that Deckard can't help but empathize with them, and he even falls for one.

Blade Runner was loosely based on the Philip K. Dick novel Do Androids Dream of Electric Sheep? The title itself comes from the novel The Bladerunner by Alan E. Nourse.[1] Other than the title, the movie has nothing to do with The Bladerunner. It just sounded cool.

The film was a commercial failure upon release, but it later become a widely acknowledged classic that regularly appears on "Best Films of All Time" lists.

A sequel, Blade Runner 2049, directed by Denis Villeneuve (Prisoners, Sicario), starring Ryan Gosling and with Roger Deakins as cinematographer, was released on October 2017. Harrison Ford, as well as original writer Hampton Fancher and Ridley Scott as an executive producer, returned for the production.

Not to disappoint anyone, but no one runs on blades in this movie.

Tropes used in Blade Runner include:

RCA (big neon sign out Deckard's apartment window), as a company, bit the dust in '86 (the name is still trademarked by Technicolor, however, and sometimes used on products that come from its licensees). TDK, whose sign appears on the building opposite the Bradbury near the end, seems to have made it through more or less OK... although its sign is partially obscured.

It's too bad she won't live. But then again, who does?

Retrieved from "https://allthetropes.org/w/index.php?title=Blade_Runner&oldid=1960558"
Categories:
Cookies help us deliver our services. By using our services, you agree to our use of cookies.