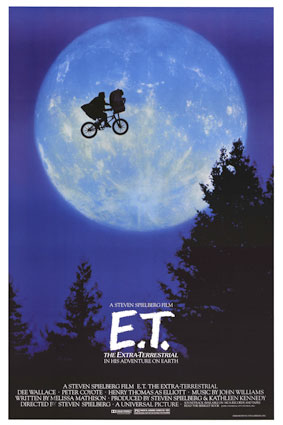 E.T. the Extra-Terrestrial is perhaps Steven Spielberg's signature fantasy film. It was the biggest blockbuster of 1982 and, in fact, The Eighties as a whole. John Williams' score, flying bicycles, and an Ugly Cute alien hero are just the tip of the iceberg here.

A group of aliens are in a forest on Earth, not far from a suburb, exploring and collecting plant samples. They are forced to leave in a hurry when alien-seeking scientists arrive on the scene, and one of them is not on the ship when it takes off...

Down in that suburb live Elliott, his older brother Michael, and his little sister Gertrude, the products of a broken home with an overworked mom named Mary (the dad is absent). Over the course of a few days, lonely Elliott encounters the stranded alien and lures it to his house with Reese's Pieces, offering it shelter and naming it E.T.

E.T. learns English -- if only a few words -- through the kids and especially television, and finally is able to tell them what he wants: to "phone home." Elliott helps him rig up a telephone-like device from such things as a Speak-and-Spell to attempt to transmit a message to his planet. But as they wait for a response, E.T. gradually sickens -- as does Elliott, because the alien has developed a psychic bond with him. The government scientists catch up with E.T., and soon all seems lost for the poor little guy. It will take The Power of Love and a daring escape to set things right...

For information on the infamous video game adaption, go here.

Tropes used in E.T. the Extra-Terrestrial include:

Michael: I'm gonna crash and we're all gonna die and they'll never give me my license!

Elliott: *fed up that nobody believes him about E.T.* IT'S NOTHING LIKE THAT, PENIS BREATH!

Rev. Lovejoy: I remember another gentle visitor from the heavens, he came in peace and then died, only to come back to life, and his name was... E.T., the Extra-Terrestrial. (cries) I loved that little guy.