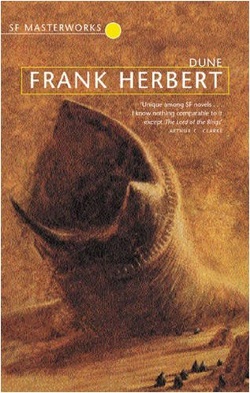 Popular series of Science Fiction novels, originated by Frank Herbert and continued after his death by son Brian Herbert. The original novel was rejected twenty times by various publishers before finally being published in 1965 by Chilton, a publishing house best known for its DIY auto repair guides.

The novel is set approximately 16,000 years in The Future, in a galaxy-spanning empire loosely based on the Holy Roman and Ottoman Empires, ruled by feuding nobles, arcane religious sects, and Byzantine corporate monopolies. Its five sequels by the original author, and further prequels and sequels by Brian Herbert, span nearly 20,000 years of galactic history overall.

Much of the action throughout the series takes place on the eponymous planet, Arrakis, commonly called Dune by the native Fremen. Arrakis is a desert planet largely populated by the nomadic, xenophobic Fremen and inhabited by giant sandworms that destroy anything caught out in the open, and would be of little interest to the rest of the galaxy if not for one thing: it is the only source in the entire galaxy of "Spice", an all-purpose chemical that triples the human lifespan, unlocks or enhances the capacity of humans for telling the future, and therefore makes Faster-Than-Light Travel possible in a culture where computers have been made illegal by religious fiat.

As the story opens, the Atreides family have just gained control over the Arrakis fiefdom from their longtime rivals, House Harkonnen - but this turns out to be a cunning plan by the Harkonnen and the Emperor to eliminate the Atreides, whom the Emperor has come to see as a threat to his own power. Wearing the uniforms of the Harkonnen, the Emperor's undefeatable Sardaukar stormtroopers assault the Atreides compound on Arrakis and destroy it, leading the way for the Harkonnen to retake the planet and capture Duke Leto Atreides, who commits suicide rather than let his rival have the satisfaction of killing him. Leto's fifteen-year-old son Paul Atreides, sole heir to the family line, escapes into the desert with his mother (who is pregnant with his sister) and takes refuge with the Fremen, where, upon adopting their ways and their religion, he becomes the Kwizatz Haderach, a long-awaited Messiah with the power to see into the future. Taking the name Muad'dib (a kind of desert mouse of Arrakis whose name means "he who teaches manners" in Arabic), he unites the Fremen tribes into a jihad that eventually defeats both the Harkonnens and the Imperium, and Paul declares himself Emperor.

The first two sequels, Dune Messiah and Children of Dune, conclude Paul's story as he comes to realize that prescience is a trap - by seeing into the future, one dooms oneself to live out that vision. In spite of Paul's best efforts to prevent it, the war he began on Arrakis has become an interstellar jihad that has sterilized entire planets and left him one of history's greatest murderers.

As the remaining powers in the galaxy - the Spacing Guild, the Bene Gesserit sisters who control religion in the galaxy, the Bene Tleilaxu masters of genetic engineering, and the children of the deposed emperor Shaddam, one of whom has been married to Paul for political reasons - begin to conspire against him, his visions grow darker. As the result of his late father's attempt to make Arrakis temperate and verdant, the sandworms are dying - and with their extinction will come the end of the spice, economic collapse, and the extinction of the human race. In order to try and prevent this from happening, Paul wanders into the desert to die, and his son Leto II merges with several larvae of the soon-to-be-extinct sandworms that produce the Spice, becoming one himself and making himself nearly immortal.

God Emperor of Dune, the fourth novel in the series, picks up 3500 years later at the end of Leto's reign. Leto, now the last sandworm on Arrakis and God-Emperor of all humanity, has prevented the collapse of civilization his father foresaw, but only by making himself into a tyrant beyond compare. Much of the novel takes place as a series of conversations between Leto, a clone of Paul's long-dead retainer Duncan Idaho, and Siona Atreides, the distant descendant of his sister Ghanima and a leader of the rebels seeking to overthrow him. Despite his best efforts to convince them that what he has done was necessary for the greater good, they decide the universe is better off without him, and manage to kill him at the novel's end.

The final two novels by Frank Herbert, Heretics of Dune and Chapterhouse Dune, occur 5000 years after that. After the dark ages brought on by Leto's death, there is no Empire anymore. The sandworms have returned to Arrakis, but after thousands of years of research spice has been synthesized in the laboratory, rendering it a backwater once more. The Bene Gesserit sisters, now the dominant power in the galaxy (and whose leaders are now descendants of Duncan and Siona), find themselves in a struggle for their very existence as the legacy of Leto's tyranny comes back to haunt them in the form of the "Honored Matres" - schismatic Bene Gesserits who fled the galaxy as a result of his persecution, and who in the absence of the spice produced an entirely new culture that relies on sex as a weapon and a tool of brainwashing. The sisters' hopes rest in an attempt to recreate Arrakis on their capital world of Chapterhouse and in a new clone of Duncan Idaho who might be a new Kwizatz Haderach, or something even more powerful and frightening. Herbert died before completing the final story in the "second trilogy" beginning with Heretics.

In the 2000s, Brian Herbert and Kevin J. Anderson said they used notes from Herbert found in a safety deposit box to write prequels and two sequels to the Dune series. These books comprise ten novels overall - the "Legends of Dune" trilogy which covers the rise of the Empire and the Spacing Guild some 10,000 years prior to the original novel; the "Prelude To Dune" trilogy which follows the conflict between Leto Atreides and Vladimir Harkonnen in the years prior to Paul's birth; Hunters of Dune and Sandworms of Dune, two sequels which complete the second trilogy started by the elder Herbert; and Paul of Dune and The Winds of Dune, a pair of Interquels set between the novels of the original trilogy. Unfortunately, they were not very well received. FHM magazine once speculated that while they may have begun with notes from a deposit box, by the time of the last books they were down to a Post-it Frank left on the fridge saying "NOTE: Write more Dune books". Penny Arcade's assessment of these books was rather.... blunt.

The entire series is steeped in Arabic language and culture; it is implied that, in the distant future in which the books are set, Western and Eastern culture and religion have blended together into a pseudo-homogeneous whole. Religions such as "Mahayana Christianity" and "Zensunni" are referred to though not explicitly described, and many Arabic words have found their way into the standard language spoken by the people of the Galactic Empire, especially after the Fremen crusade spreads aspects of their culture to thousands of worlds. (An extensive glossary is included in the first novel, without which many readers might find it incomprehensible) The Bene Gesserit sisterhood, an order of philosopher-nuns that considers itself the guardian of human civilization, extensively manipulate various religions over a scale of thousands of years in order to protect their agenda. Paul Atreides, through his actions in the first novel, effectively creates a religion of his own, with effects that reverberate throughout the millennia.

Dune has been adapted into movie form three times:

Dune also served as the inspiration for several popular video games, most notably Dune II: The Building of A Dynasty which is the Ur Example of the modern Real Time Strategy game.

Notable for having a Shout-Out directed at it in almost every videogame with a Shifting Sand Land area in the form of sandworms, possibly an example of Popcultural Osmosis.

The Dune books contain examples of:

When Paul shows up on the doorstep of the Sisters retreat, Helena at first wants nothing to do with her grandson, even though he is being hunted by assassins.

Subverted, however, when it turns out that using personal force shields on Arrakis attracts sandworms. One of the common Fremen weapons is the "maula pistol", essentially a spring-loaded slugthrower. And also when Baron Harkonnen uses old-fashioned artillery to trap the retreating Atreides soldiers in caves.

It's stated that the limit of the Bene Gesserit Reverend Mothers was that their training to particularly feminine/maternal instincts meant that they couldn't access their male ancestry in their Other Memory. The Kwisatz Haderach was intended to overcome this weakness (as well as having other capabilities), which would require a male trained in Bene Gesserit ways. Note the fact that the Gesserit wanted to have a Kwisatz Haderach, but he ended up coming a generation too early for their plans -- and then refusing to go along with them.

The name of the hunting-language Chakobsa just might be the only time a Circassian language has ever been used in Western fiction of any genre. It's taken from the Adyghe word Ch'ak'webze or Ch'ak'obze, "hunter's language", which refers to a special language register used in the course of a hunting expedition.

It is later revealed in Children of Dune that during his last stand in Dune Idaho slew nineteen Sardaukar -- and at the height of their power and training, a single Sardaukar was reportedly a match for ten ordinary house regulars and even a Bene Gesserit adept.

Adaptations with their own trope pages include:
Other adaptations provide examples of:

Retrieved from "https://allthetropes.org/w/index.php?title=Dune&oldid=1956996"
Categories:
Cookies help us deliver our services. By using our services, you agree to our use of cookies.