Have I Got News for You 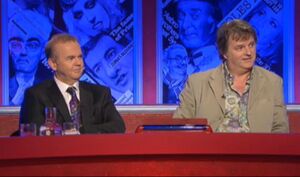 It's the opposing captains, on the same team.

Satirical Panel Show focusing on politics that has been running since the end of the Margaret Thatcher era, with two series per year. Debuted in 1990. The two team captains are Ian Hislop (editor of satirical magazine Private Eye) and comedian Paul Merton.

The show began with Angus Deayton as host, but he was fired after being caught taking cocaine. Twice. With a lady who was definitely not his partner at the time. Who later turned out to be a prostitute in disguise. Who was working for the papers. And That's Terrible. On the episode after this came to light, Hislop brought out the paper and liberally quoted from the article; Merton went one better and wore a T-shirt with the front page of the newspaper printed on it. Beginning with the third episode of the following series, the show began using guest presenters.

The show's basic rounds are:

Tropes used in Have I Got News for You include:
Retrieved from "https://allthetropes.org/w/index.php?title=Have_I_Got_News_for_You&oldid=1832782"
Categories:
Cookies help us deliver our services. By using our services, you agree to our use of cookies.