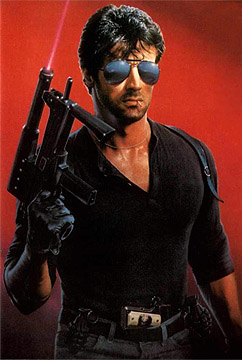 Sure, our society may be built upon rules and procedures, but they make for bad television. Sometimes you have to bend the rules, rough up the suspects, and ignore your supervisors and the Constitution to get stuff done.

A Cowboy Cop may be an Anti-Hero if he is the star of the show, typically a Jerk with a Heart of Gold whose unlikely claims will generally be proven correct. However, in shows that feature cops as secondary characters, the Cowboy Cop is often at odds with the main characters, as he will trample all over the crime scene and/or the suspect's rights. If Da Chief is a Cowboy Cop he would often reprimand the naive upstart who is being too soft with the criminals and will gladly let the loose cannons go in shooting first and asking questions later.

In a SWAT Team type situation where the cops are expected to shoot to kill, he does not care about human shields or property damage and will more often than not almost level the place to take down the suspects, with extreme lethal force.

Cowboy Cops are almost always asked to Turn in Your Badge by Da Chief, at which point they usually become a Vigilante Man in regards to whatever bad guy they are after for either the rest of the movie or until they get their badge back. As a result of his flagrant rule-breaking, Internal Affairs hates the Cowboy Cop with a passion. Sometimes the policemen who oppose the Cowboy Cop are revealed to be Corrupt Cops.

Being a Cowboy Cop may be just be backstory—the character might make the transition to another field such as being a federal officer or a Man in Black, where their methods might fit in a little better.

May often be the recipient of Arson, Murder, and Lifesaving.

Compare Bunny Ears Lawyer, Rabid Cop. Contrast By-The-Book Cop. Compare and contrast Dirty Cop. While a Cowboy Cop is generally more well-intentioned than the Dirty Cop, his rule-breaking could be presented as a type of corruption in more deconstructive works. For the military version, see Military Maverick. Old-Fashioned Copper is the specifically British subtrope.

Examples of Cowboy Cop include:

Occasionally he resorts to it and the trope is played straight. It is always in circumstances that clearly warrant extreme measures. His rationalization: "It's me doing it." Put it this way; Vimes is a Cowboy Cop who kept getting promoted. He's also very aware that the justification "It's all right to break the rules because it's me doing it" could very easily be the start of a very slippery slope.

A character that is a unmitigated Cowboy Cop, is the wali of Prince Cadram, 71-hour Ahmed. As he says to Vimes (paraphrased): "Your beat is a city you can walk across in half an hour. Mine is a million square miles of barren desert with no company but sword and camel." His rationality is that he must strike first, and swiftly, before the criminal has a chance to. He got his nickname from when he killed a man in the man's own tent after 71 hours, not the 72 mandated by Klatchian hospitality customs, because the man had poisoned a well, and he had testimony and a confession.

It is repeatedly demonstrated that only officially sanctioned, by-the-books police work will get the cops the convictions they need. And in season five, when McNulty goes completely off the rails, it results in the worst drug dealer they ever went after getting away with all his crimes scott-free.

That said, McNulty never actually assaults anyone and is tolerated to an extent by his coworkers because their superior's directive is to do nothing about organized crime unless someone with political clout forces them to do it.

He is actually quite professional when the crimes are not targeted at him or someone he cares about. His usual style is more laid back and Columbo-like. However, when things get personal he has no issue with breaking the rules.

As such, a Paragon character can rein him in and teach him that it's important to do things the right way, not just get them done. Although it doesn't end up sticking completely -- even if you took this route with him, he's become a vigilante by ME 2, which he will apologise for. In fact, Garrus even admits in Mass Effect 2 that he isn't a very good turian, because of his refusal to obey orders if he feels the order is unjust.

Retrieved from "https://allthetropes.org/w/index.php?title=Cowboy_Cop&oldid=1829326"
Categories:
Cookies help us deliver our services. By using our services, you agree to our use of cookies.