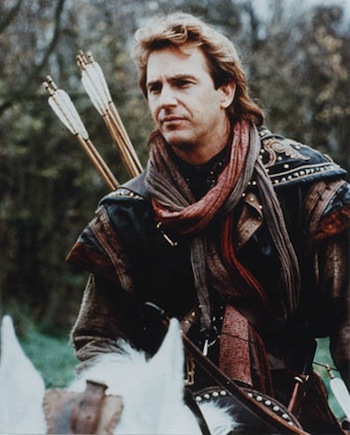 "When you look as good as I, who needs a British accent?"

A 1991 movie starring Kevin Costner in the title role. The story is familiar, Robin, a crusader, escapes Turkey alongside a Muslim (Morgan Freeman), and they return to England. They discover that Robin's father (Brian Blessed) has been killed by the Sheriff of Nottingham (Alan Rickman), who is also now apparently a devil worshiper.

They become outlaws, steal from the rich and give to the poor, men are made merry, buckles are swashed, and they all live Happily Ever After.

A generally good movie that opened to decent reviews and was nominated for quite a few awards, including an Oscar. Noted for Kevin Costner Not Even Bothering with the Accent.

The Mel Brooks 1993 parody Robin Hood: Men in Tights largely lampoons this movie, although it acknowledges other elements of the legend.

Tropes used in Robin Hood: Prince of Thieves include:
Retrieved from "https://allthetropes.org/w/index.php?title=Robin_Hood:_Prince_of_Thieves&oldid=1830849"
Categories:
Cookies help us deliver our services. By using our services, you agree to our use of cookies.