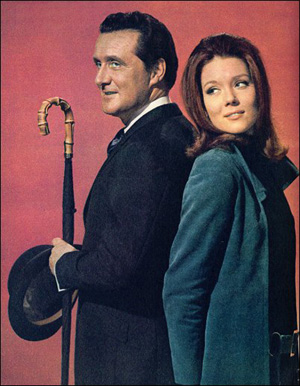 In earlier seasons (1962-1964), the female co-star was Honor Blackman (who would later appear in a Bond film).

The series was originally created as a vehicle for Ian Hendry (who would not later appear in a Bond film), to capitalise on the popularity he had developed during his previous show, Police Surgeon. In the Pilot, his character, Dr. Keel, was recruited by spy John Steed (Macnee) as a part-time expert assistant in return for Steed's help capturing the murderers of Keel's wife; this was pretty much the last time in the series any actual avenging took place. This first series was generally a grim-and-gritty crime affair, centering around drug smugglers, arms dealers and endless cases involving stolen diamonds.

A TV strike delayed the start of the second season so Hendry left to pursue a film career. Steed became the show's central character and the production team started to explore other partnerships. The first, lasting just a few episodes, was Dr. King, a blatant Suspiciously Similar Substitute. He was followed up by stories that alternately paired Steed up with nightclub singer Venus Smith (The Chick) and female spy Cathy Gale (arguably TV's first true Action Girl). Cathy, who was mostly written identically to Dr Keel, proved to be the most popular and Venus was quietly dropped.

This retooling of the show became a massive smash. With a consistent Spy Couple format, the show began to move away from more mundane villains and towards science fictional supervillains and diabolical masterminds.

Blackman left to pursue a film career (playing Pussy Galore in Goldfinger[1]) and was replaced by Diana Rigg as Emma Peel, described as a "talented amateur". Simultaneously, production switched from videotape to 35mm film. The show became much more stylish and faster-paced and even gained a new theme tune, although it wasn't until the next season that it was produced in colour. Mrs Peel - whose husband didn't make an appearance until her final episode - set the trend of the Spy Catsuit and continued the gentleman spy/Action Girl setup. Steed and Mrs Peel became the show's iconic pairing, helped by the introduction of filmed and colour episodes raising the show in the public's consciousness.

The stories became crazier and crazier - Space plants from the moon! Assassination by laser! Invisible spies! Housecats trained to kill! Politicians hypnotised into becoming children! - and typified the swinging cool of 1960s Britain.

Eventually Rigg left Steed for the embrace of George Lazenby's doomed James Bond, and Steed took on his last partner, Tara King. Tara (played by Linda Thorson, who also has not appeared in a Bond film) was a more feminine character, though still an Action Girl, but the series never survived the loss of Rigg, massive problems behind the scenes and being put up in America against Rowan and Martin's Laugh-In; the series finished after just one season with Tara King.

A Revival was attempted in 1976, with The New Avengers, starring Macnee and Joanna Lumley (better known for Absolutely Fabulous, but had earlier appeared in a Bond film). Oh, and the guy off the Nescafe adverts. But the new, gritty tone -- matching shows like The Sweeney and The Professionals -- was too much of a departure and it soon collapsed. This series lasted from October, 1976 to December, 1977. A total of 26 episodes in two seasons.

It was later made into a movie starring Uma Thurman and Ralph Fiennes (who afterwards appeared in a Bond film), whose only redeeming quality was Sean Connery (who had appeared in many Bond films) hamming it up as an evil Scotsman. For more on this film, see The Avengers (1998 film).

Not to be confused with the comic or the Marvel Cinematic Universe film adaptation.

Tropes used in The Avengers (TV series) include:

Other tropes that appeared on the show include:

The 1976-77 remake series The New Avengers provides examples of:
Retrieved from "https://allthetropes.org/w/index.php?title=The_Avengers_(TV_series)&oldid=1952083"
Categories:
Cookies help us deliver our services. By using our services, you agree to our use of cookies.