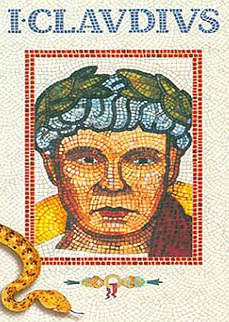 This renowned 1976 mini-series (based on the books I, Claudius and Claudius the God by Robert Graves) follows the history of the Roman Empire, from the latter reign of Augustus (starting around 24/23 B.C.) to the death of the eponymous character, Claudius, through whose eyes all of the action in the series is seen. The series opens with an elderly Claudius penning his memoirs, which tell of the history of his family.

Director Alexander Korda had attempted to film the story in 1937 with Charles Laughton in the role of Claudius, but for various reasons the movie was never completed. When The BBC decided to make their own version they had to negotiate with Korda's production company over screen rights to the story.

This British series is probably one of the best dramas ever produced for television, starring loads of famous actors (among them Patrick Stewart as the shifty Roman general Sejanus.) John Hurt puts in a good turn as the giggly-insane Caligula, but it is Sian Phillips who steals the show as the scheming Livia, a character who is as deft at cutting people down with her dry wit as she is at poisoning them. George Baker's in it too. And let's not forget Derek Jacobi's breakout performance as the poignant Claudius, a man who-- even after he gets the reins of power firmly in his hands-- finds he can do very little to stop the whirlwind of death and corruption which threatens to destroy those he loves.

It is occasionally pronounced ironically by British viewers as written-- "I, Clavdivs".

HBO and BBC have announced a new miniseries adaptation.

Tropes used in I, Claudius include:
Retrieved from "https://allthetropes.org/w/index.php?title=I,_Claudius&oldid=1829940"
Categories: