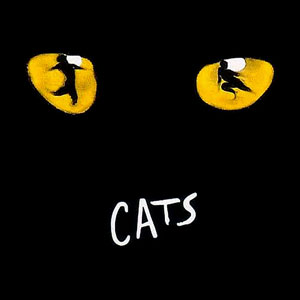 —From the opening number, "Jellicle Songs for Jellicle Cats."

Andrew Lloyd Webber's other most famous musical. It's a show about Cats. More precisely, it's about a tribe of Cats, the Jellicle Cats, and the once-a-year event where the Jellicle Leader, Old Deuteronomy announces the cat who can now be reborn and come back in a different Jellicle Life, after the cats spend time introducing themselves, and their fellow cats, through song. It's based, pretty much, on T. S. Eliot's book of poems Old Possum's Book of Practical Cats.

A video version of the stage musical was released in 1998. After decades in Development Hell, a film version with an All-Star Cast (Judi Dench, Idris Elba, Taylor Swift, Ian McKellen and more) finally reached theaters in 2019.

Tropes used in Cats include:

And they say that all the cats
Whose wicked deeds are widely known
(I might mention Mungojerrie,
I might mention Griddlebone)
Are nothing more than agents
For the cat who all the time
Controls their operations
The Napoleon of Crime!

Macavity's a ginger cat,
He's very tall and thin.
You would know him if you saw him,
For his eyes are sunken in.
His brow is deeply lined with thought,
His head is highly domed,
His coat is dusty from neglect,
His whiskers are uncombed.
He sways his head from side to side,
With movements like a snake.
And when you think he's half asleep,
He's always wide awake!

He is extremely tall and thin, his forehead domes out in a white curve, and his two eyes are deeply sunken in this head. He is clean-shaven, pale, and ascetic-looking, retaining something of the professor in his features. His shoulders are rounded from much study, and his face protrudes forward, and is forever slowly oscillating from side to side in a curiously reptilian fashion.

And not long ago this phenomenal eat
Produced seven kittens right out of a hat!