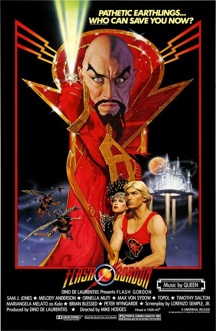 Pathetic earthlings...
who can save you now?

FLASH! AH-AH! HE'LL SAVE EVERY ONE OF US!

The 1980 Flash Gordon film from Universal is considered to be one of the most faithful movie adaptations ever made, an impressive feat considering the large gap between the classic Flash Gordon comics and film serials and this adaptation. The keys to its success in this was simple: high glorious Camp and a soundtrack by Queen. It recognized the dubious quality of the originals and their cheap and cheerful approach to storytelling and took what they pretty much would have made in the 1930's if they had had the money and technology, placed tongue firmly in cheek and got high quality theater actors to give deliciously hammy performances, and had a soundtrack by Queen.

Its actual financial success was pants. The only country where it really made it big was the UK, the same country that invented Pantomime, wry humor and the band Queen, who did the soundtrack. It will probably remain the most well remembered version of Flash Gordon due to its enduring cult classic status helped heartily by its sense of humor and the soundtrack by Queen.

Herewith a rundown of the plot, courtesy of the dialogue sampled for the title track of the soundtrack album (by Queen):

However, merely reading the above cannot do it justice. Watch the music video and stand in awe.

Important trivia. George Lucas wanted to direct this years before, but producer Dino De Laurentiis turned him down. Thus Lucas decided to make his own space adventure series. Although some fans actually prefer the camp of this movie to Star Wars anyway. Star Wars didn't have Queen as it is.

Retrieved from "https://allthetropes.org/w/index.php?title=Flash_Gordon_(film)&oldid=1928287"
Categories:
Cookies help us deliver our services. By using our services, you agree to our use of cookies.