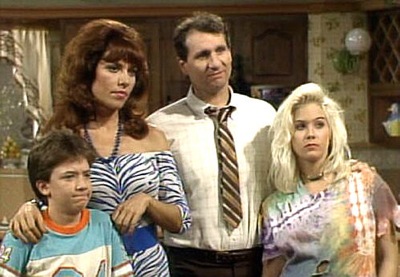 Married... with Children is a Sitcom about consummate loser Al Bundy: Once a high school football hero dating the hottest girl in school, now a balding, starving, destitute shoe salesman—married to the same girl who's now a useless, bickering TV junkie. He's still driving the same piece of junk car he bought in high school, and is cursed with a moronic daughter who Really Gets Around, a sane, yet perverted son, and a dog that might as well be a throw rug.

The show premiered on April 5, 1987 as the very first program ever shown by the brand new FOX Network, and along with 21 Jump Street and The Tracey Ullman Show was one of the network's few hits before the NFL and The Simpsons turned the network into a major player. It was a constant ratings success until it ended in June 1997; it's still Fox's longest-running live-action sitcom. This is the show in which Christina Applegate and Katey Sagal got their starts.