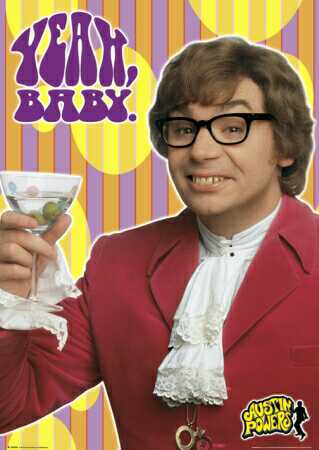 You said it, Austin.

A movie trilogy about a temporally displaced British Ministry of Defence agent Austin Powers, and his arch-nemesis, Dr. Evil, who is obsessed with bringing The End of the World as We Know It and whose plans Austin consistently foils.

The three films are parodies of the Spy Drama genre, particularly James Bond, to the point that two of the three movie titles are direct spoofs of James Bond movie titles. (Word of God has also acknowledged Jason King as an influence, but they don't make such a big deal of it because modern audiences are more likely to have heard of James Bond.) Lampshade Hanging is everywhere, and forget Leaning on the Fourth Wall, Austin dances on top of it. The series consists of:

The following tropes are common to many or all entries in the Austin Powers franchise.
For tropes specific to individual installments, visit their respective work pages.
Retrieved from "https://allthetropes.org/w/index.php?title=Austin_Powers&oldid=1682611"
Categories:
Cookies help us deliver our services. By using our services, you agree to our use of cookies.