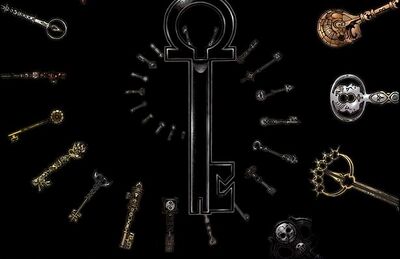 The keys we use every day are small metal objects with little grooves on them. Accustomed as we are to their use, it's hard to imagine something less tropeworthy than a humble key. Yet consider the symbolism of this tiny object- it opens that which is closed, changes barriers into passageways (or vice versa). A key in the wrong hands can be disastrous. And possession of a key can be a sign of authority and responsibility.

A Cool Key is one that is intended to reflect these values. It may simply be ornate and fancy, or it may have some special attributes that are unusual. The most common type is the Skeleton Key, which in addition to just being cool, is associated with the ability to open any lock for historical reasons: skeleton keys were used in antiquity to pass warded locks, which is why warded locks aren't very popular anymore. There are also master keys, which are designed to open any lock in a given set, allowing its possessor unlimited access to the household or area associated with the locks.

A Cool Key typically goes hand in hand (so to speak) with an equally elaborate lock or possibly a Cool Gate. In speculative settings, the key to a particular mechanism may not resemble a normal key at all.

Examples of Cool Key include:

Church: So it's a sword. It just happens to function like a key in very specific situations.
Caboose: Or it's a key all the time, and when you stick it in people, it unlocks their death.