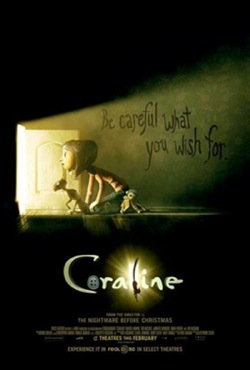 The Film of the Book of Coraline, with Henry Selick of The Nightmare Before Christmas fame as director and writer. It was released on February 6, 2009 and it's the first Stop Motion movie filmed with a 3-D camera (however, the 3-D viewings were in limited locations for a few weeks).

Coraline Jones moves from Pontiac, Michigan with her mother and father to the Pink Palace Apartments in Ashland, Oregon: an old house subdivided into three residences. With her parents frantically working on a gardening catalog in order to make ends meet and paying little attention to her, Coraline begins to feel neglected. While exploring the house, she discovers a small door with a brick wall behind it. That night, she is awoken by a mouse in her room, which she chases to the small door. She opens it, but instead of a brick wall, she finds a long, glowing passage, leading to another world.

At the other end, Coraline finds herself in the "Other World", which is inhabited by her "Other Mother" and "Other Father", who are perfect, idealized doubles of her real parents, except with black buttons in place of their eyes, and they pay close attention to Coraline. After enjoying a home-cooked meal made by the Other Mother, she spends the night in the Other World and awakens back in her bed in the real world.

Coraline continues to go to the Other World at night and is entertained by the various delights present, including idealized versions of her neighbors, a garden built in her image, and delicious food. Coraline begins to prefer the Other World to her real one, finding that she is receiving the love and attention from her other parents she is lacking at home. Eventually, the Other Mother offers to let Coraline stay in their world forever, on one condition:

That she has buttons sewn into her eyes.

When she refuses, the film takes a dark turn as the Other Mother attempts to force Coraline to stay in her world, and Coraline must rely on her bravery and wits to get back home.

Tropes used in Coraline (animation) include:
Retrieved from "https://allthetropes.org/w/index.php?title=Coraline_(animation)&oldid=1960571"
Categories:
Cookies help us deliver our services. By using our services, you agree to our use of cookies.