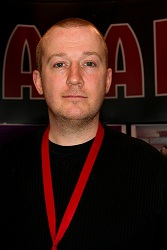 The man who gave Frank Castle his balls back.

Garth Ennis is a Comic Book writer from Holywood, Stroke Country, known for his love of graphic violence and Dead Baby Comedy and his intense dislike of superheroes and organized religion. As you can imagine, he has developed quite the devoted Hatedom among some people in the comics community. Some being not very fond of his writing quirks and pet themes, others find that in his strongest works like Hitman, Preacher and Hellblazer Ennis writes with an engaging intensity and even humanity.

While he is rather fond of author tracts, his excellent plotting and grasp of character voice makes them work (Assuming you can stomach the subject matter). Many of his characters function as Badass Long Coats, but he is also very good at writing down to earth, mortal characters as well (Agent Clive in Unknown Soldier, Tommy in Hitman, Kev in The Authority). The exception to his disrespect of superheroes is none other than Superman himself, surprisingly enough; Ennis writes the character with complete and total respect. Also known for reminding us of the many Crowning Moments of Awesome in World War II.

Works written by Garth Ennis include:

His most famous works are his four-year run on Marvel's adults-only MAX imprint version of The Punisher (aka Punisher MAX) and Preacher, which he co-created with artist Steve Dillon.

He has also written for:

Garth Ennis provides examples of the following tropes:
Retrieved from "https://allthetropes.org/w/index.php?title=Garth_Ennis&oldid=1916198"
Categories:
Cookies help us deliver our services. By using our services, you agree to our use of cookies.