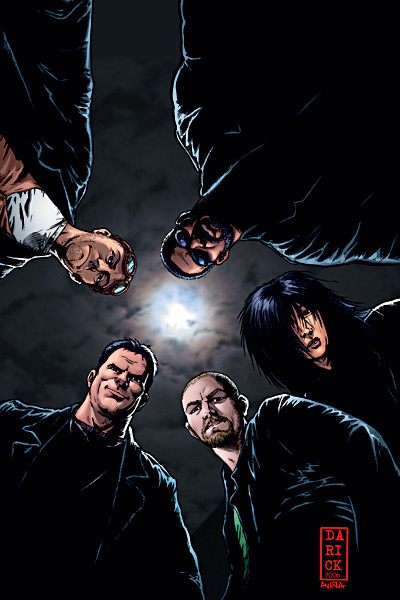 The Last Thing You See Before You Die.

The Boys is a series by Garth Ennis, with art by Darick Robertson and others, about a CIA-backed team of metahumans who kill other supers when they get out of line. Gritty, edgy and violent, the series frequently veers into Author Tract territory regarding its gleeful depiction of all costumed supers as perverts and child molesters, dropping some anvils on a lot of ugly tropes that have been plaguing superhero comics. Much like Watchmen by Alan Moore, this series is a Deconstructor Fleet. However, instead of attacking the mythos of the superhero, it goes after the sleazy corporate underbelly that grew up around it.

As with Preacher, a few different limited series have been published. Herogasm is, for whatever reason, a six-issue limited series that's essentially an extra arc in the main plot, as Butcher's squad investigates the superheroes' annual island getaway. Highland Laddie follows Hughie during his absence from the main book, as he returns to his foster parents' home in Scotland. Butcher, Baker, Candlestickmaker is a six-issue miniseries featuring Butcher, reminiscing about his life after returning to England for his father's funeral.

The team consists of:

Now has a character page that needs Wiki Magic.

Tropes used in The Boys include:
Retrieved from "https://allthetropes.org/w/index.php?title=The_Boys&oldid=1826512"
Categories:
Cookies help us deliver our services. By using our services, you agree to our use of cookies.